The image of a large, grey, two-story abandoned building with hints of red around its window panes had haunted me ever since I first moved to Nuuk. I desperately wanted to visit this building and see what else the site contained (other images were few and far between) and finally had my chance on a trip to Nordafar (Færingehavn / Kangerluarsoruseq) with Greenland Cruises.

The days are very short in Greenland in December, and it was still completely dark as we rendezvoused with our captain, Uli, and his helper, Anja, at the Tidewater Stairs at 9am.

It was a heavily overcast day with snow falling gently, so there wasn’t much to see as we took about 1.5 hours to sail ~50km south to the abandoned fishery. A good opportunity to chat to Uli and find out a little more about where we would be visiting.

Nordafar started out as an emergency Faeroese fishing base in 1926 and was expanded in 1937 to become an international fishing port. At its height in the 1950s and 60s, the Norwegian-Danish-Faroese company (hence the name NorDaFar) received daily catches from over 1000 fishermen and employed the more than 200 people who lived here with their families. But a 2-decade dream run came to an end as cod stocks suddenly dwindled and all but disappeared. The company was liquidated in 1990 and its assets sold off. The last person left permanently in 1998 and the remaining infrastructure abandoned.

It is an eerie scene sailing quietly past the crumbling factory buildings that line the fjord. Judging by the state of decay, it won’t be too much longer before whole buildings fall into the ocean. 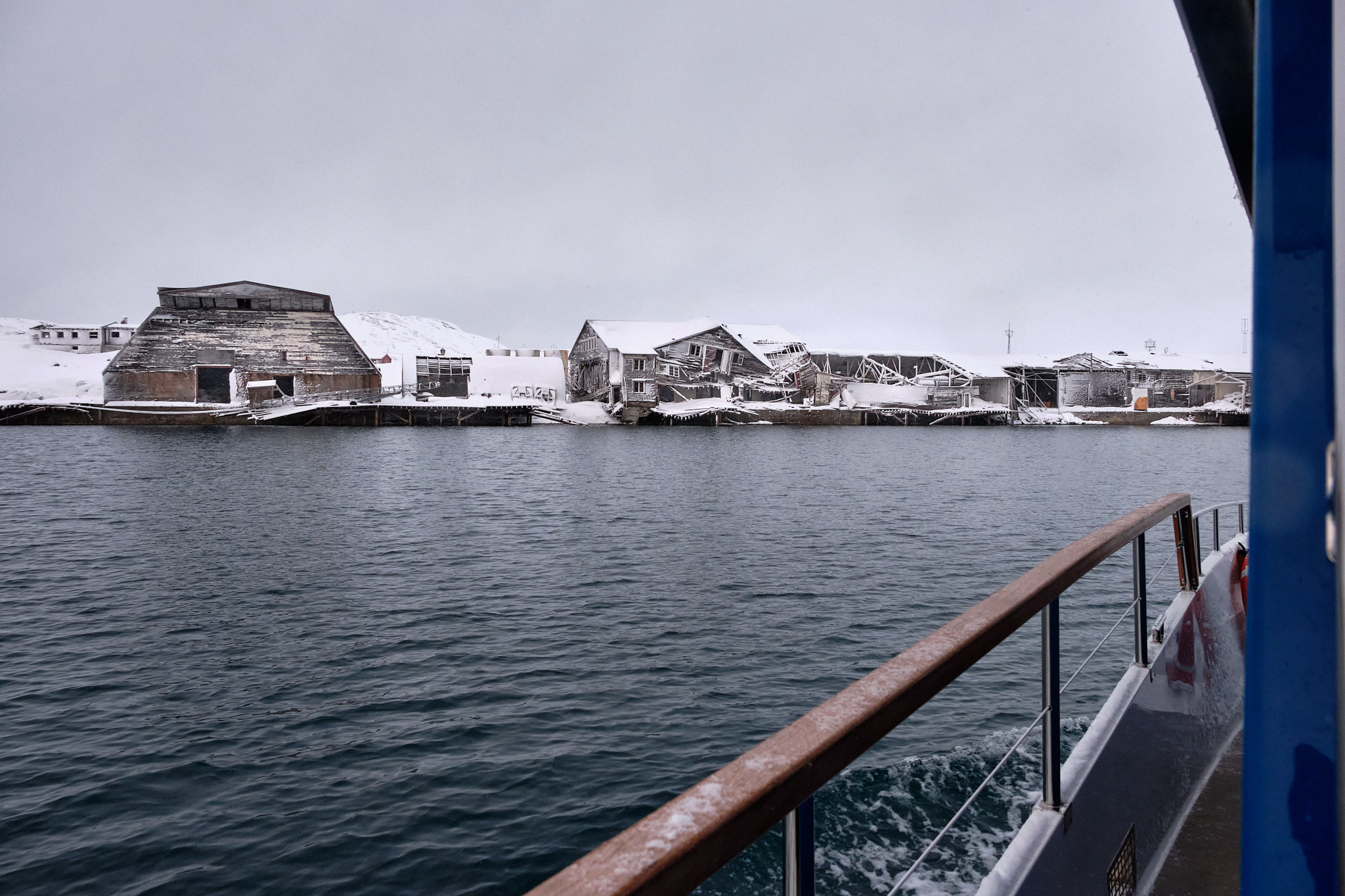 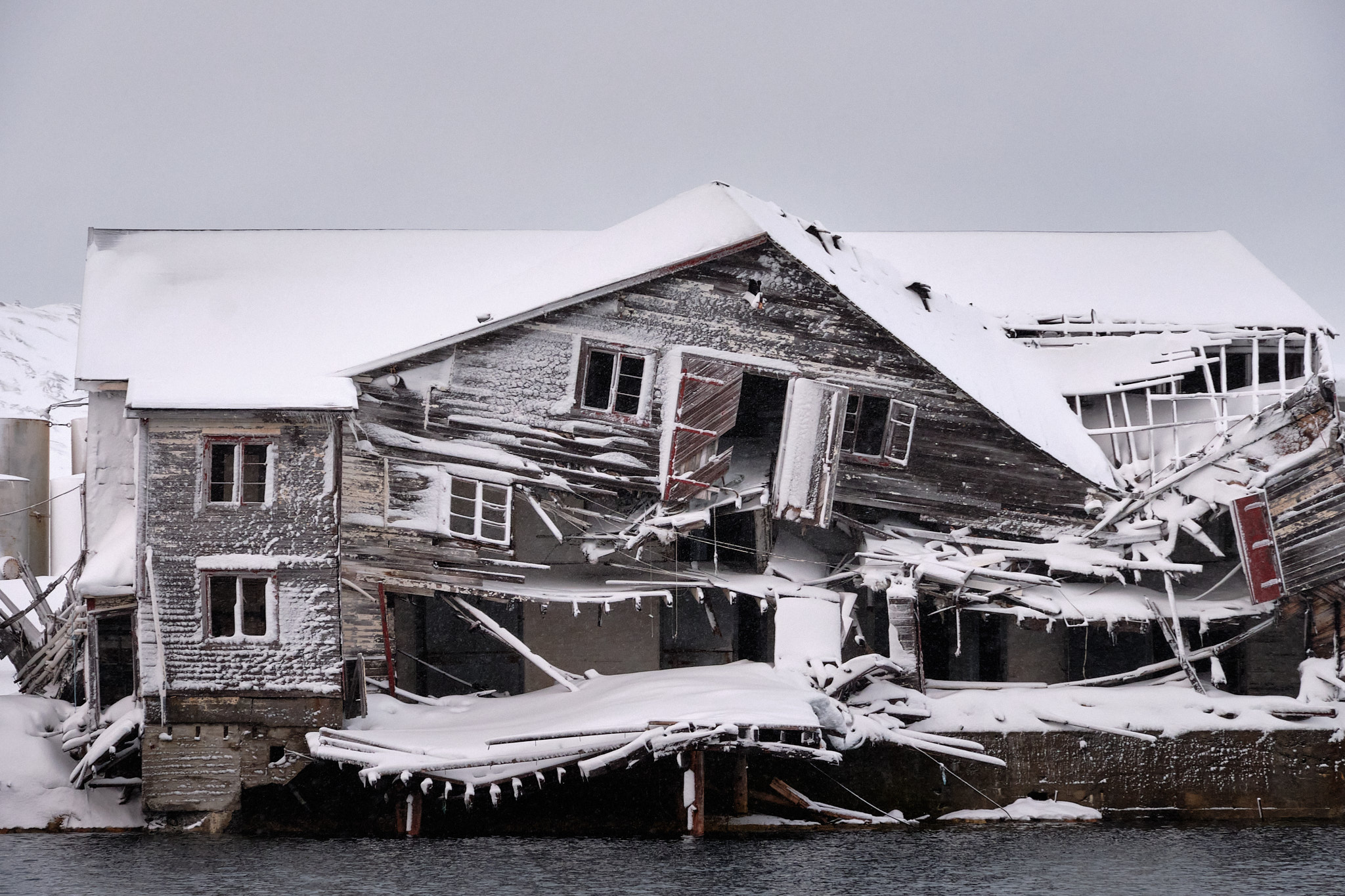 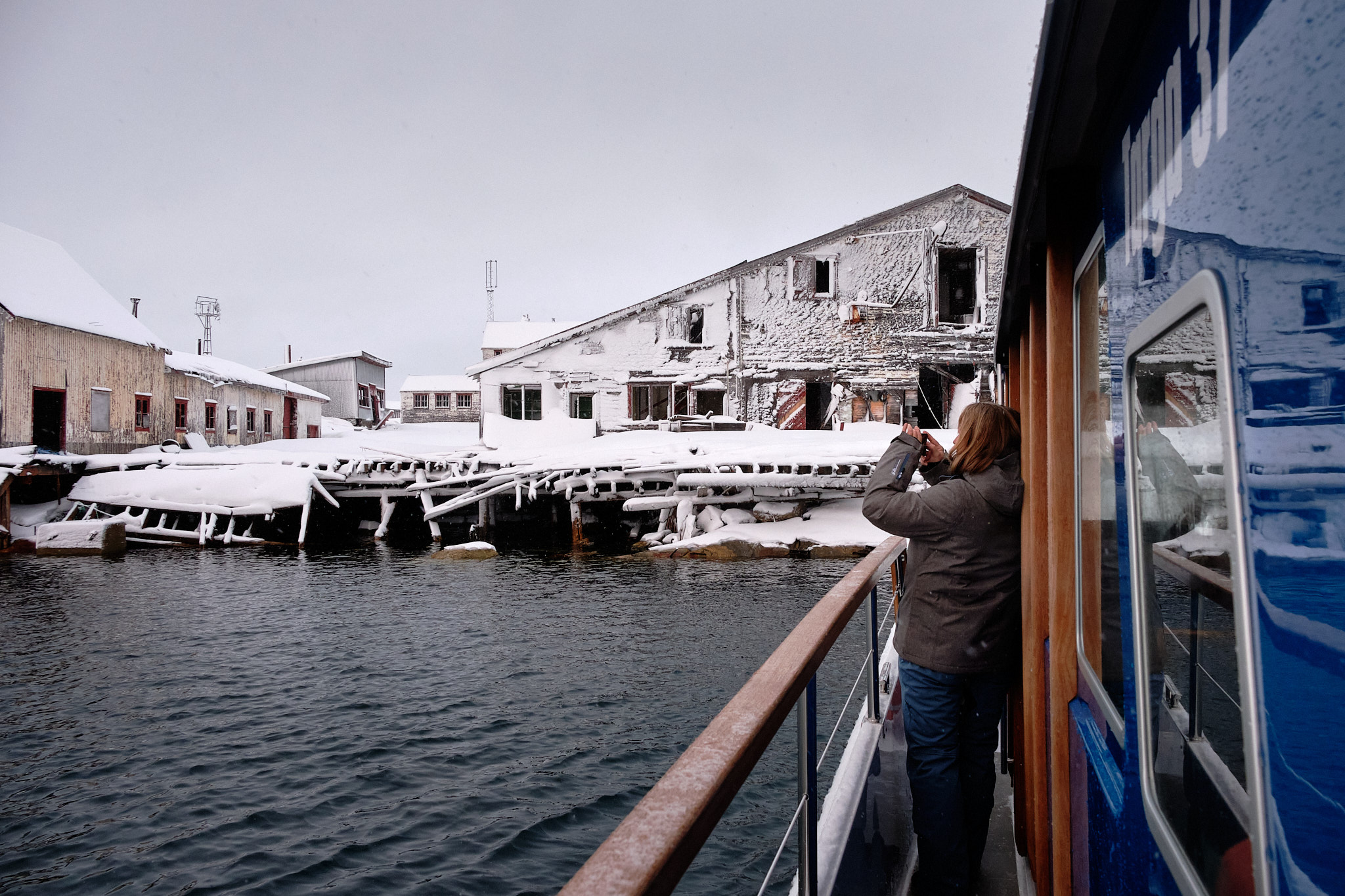 as we navigated to a point where we could climb (literally) up onto land (the fishery’s long jetty no longer exists).

We then followed Anja through knee-deep powder snow to explore the site.

Exploring the settlement of Nordafar

The first building we entered was a warehouse/store – its shelving mostly empty and the remaining items slowly fusing to rust. 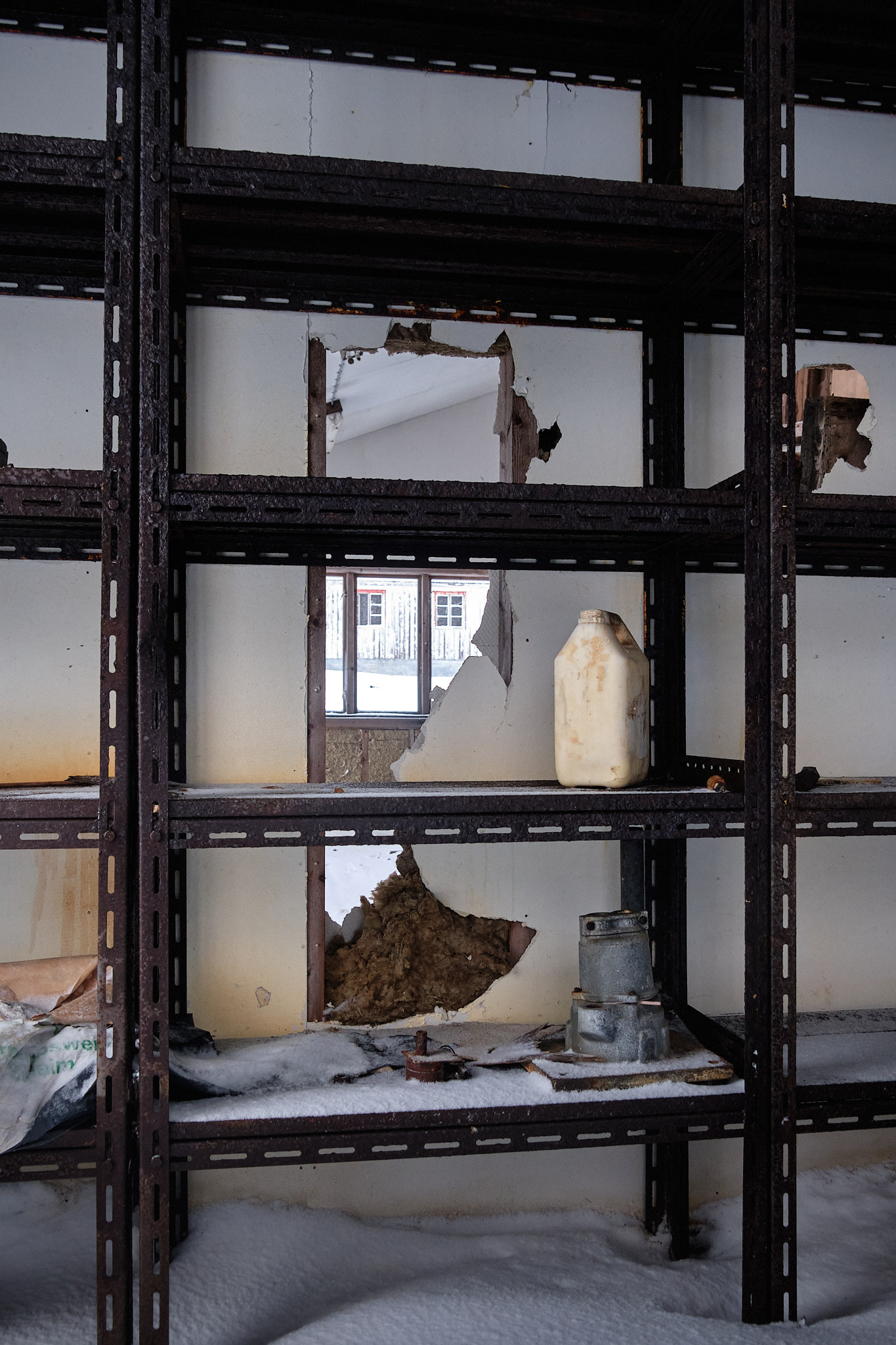 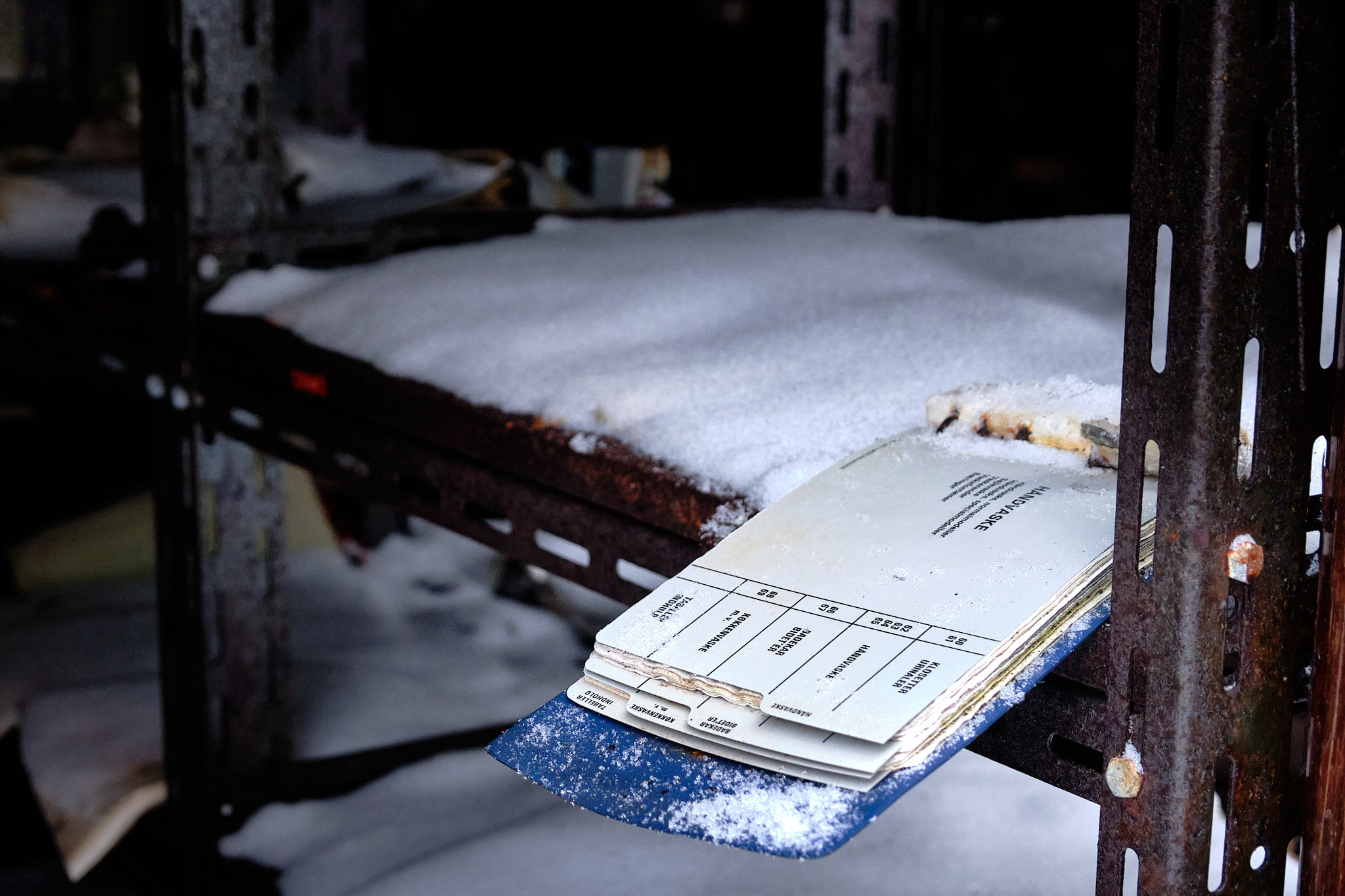 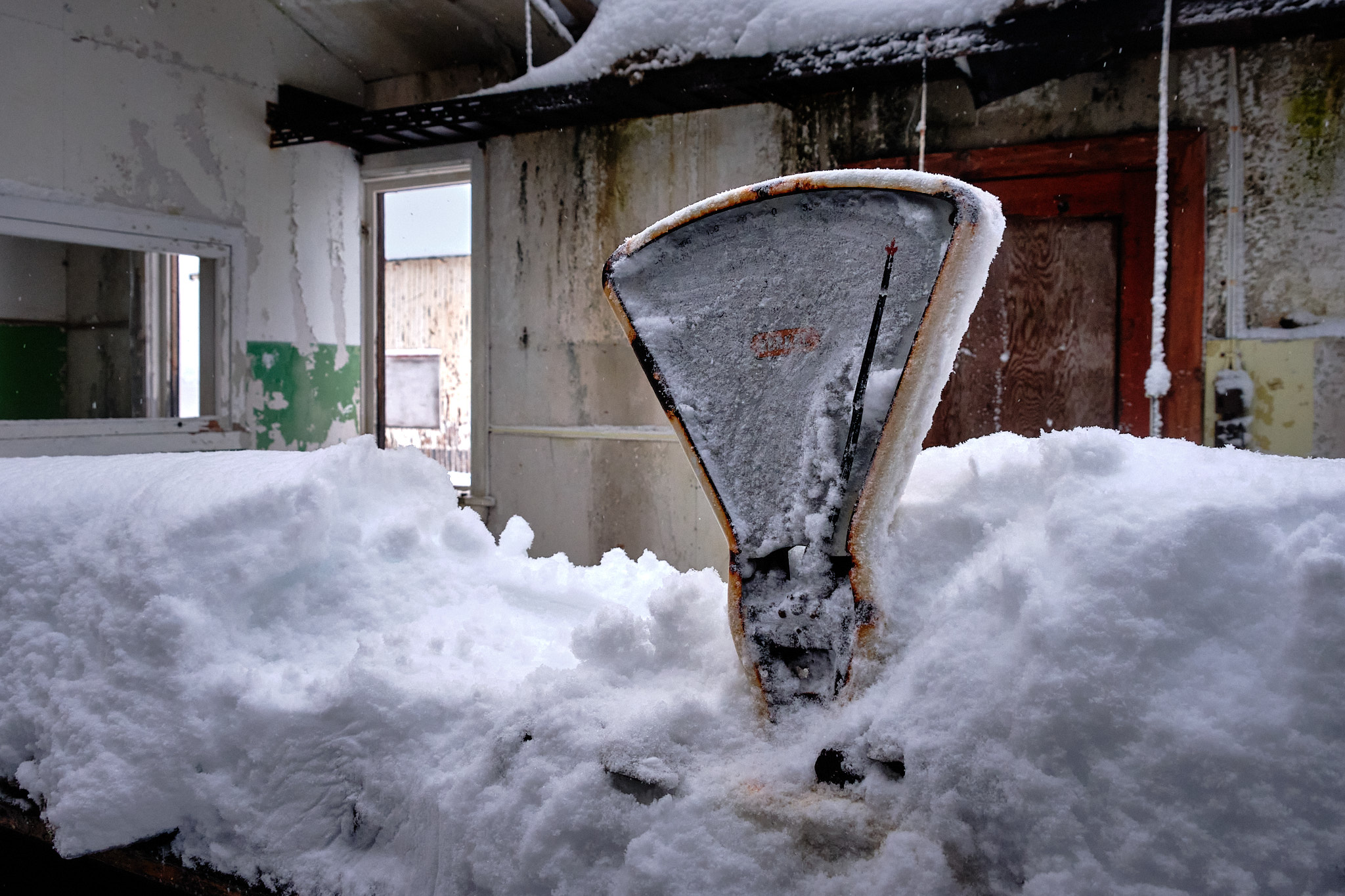 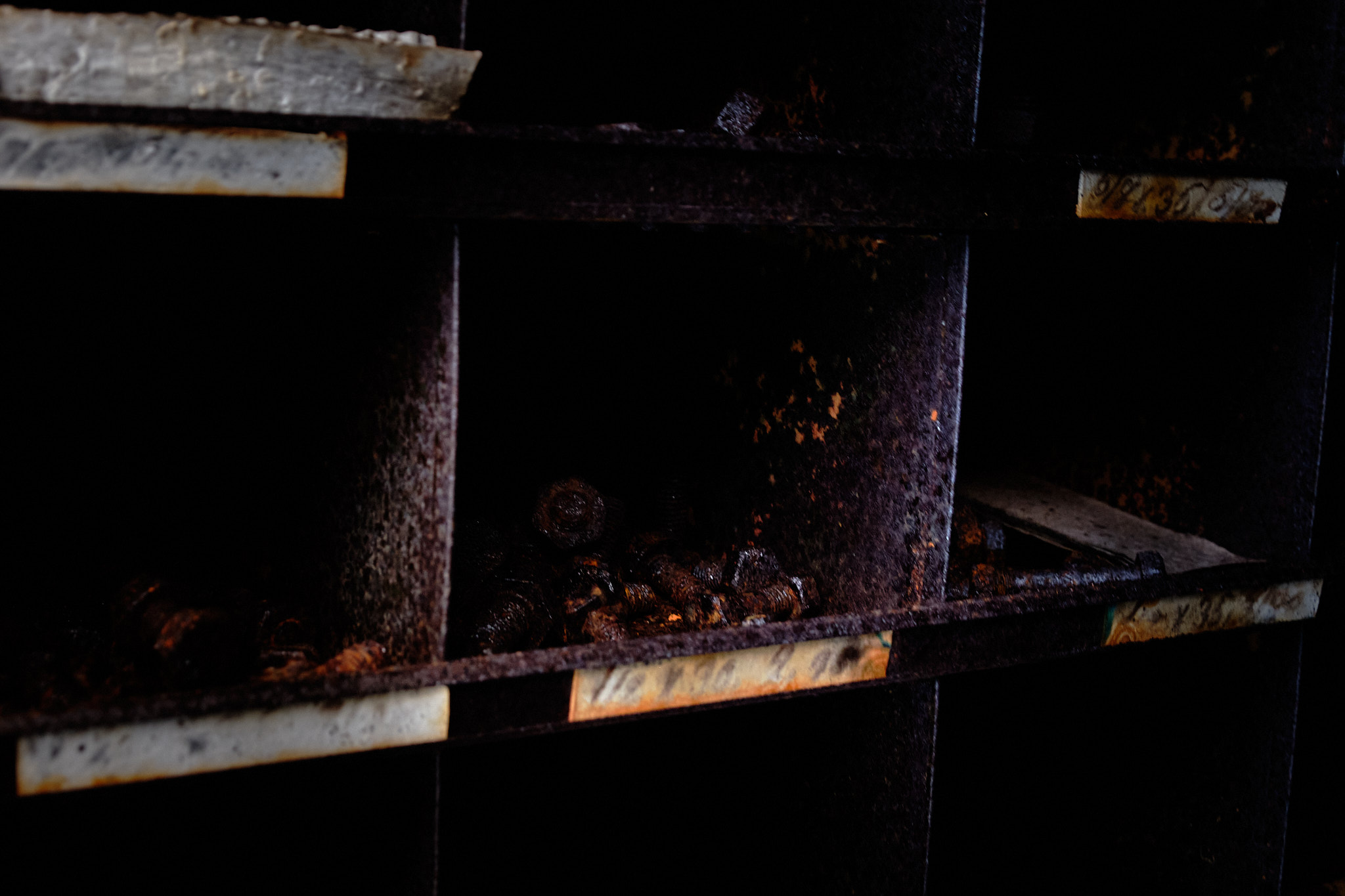 Then, the postcard building that I had come to see – which turned out to be the admin building.

We explored both downstairs and upstairs – rooms full of peeling paint and wallpaper with broken windows overlooking the whole of the site. 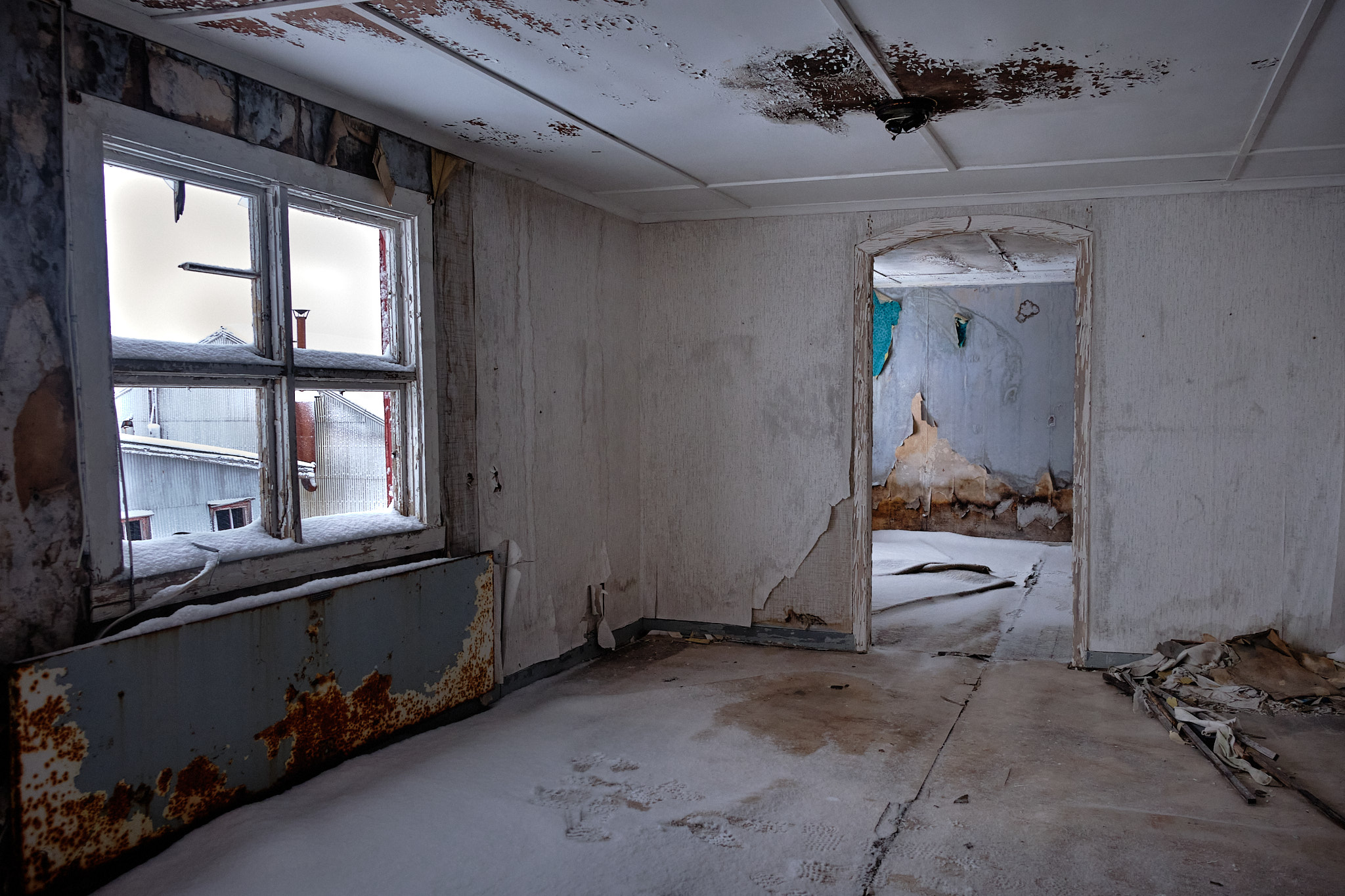 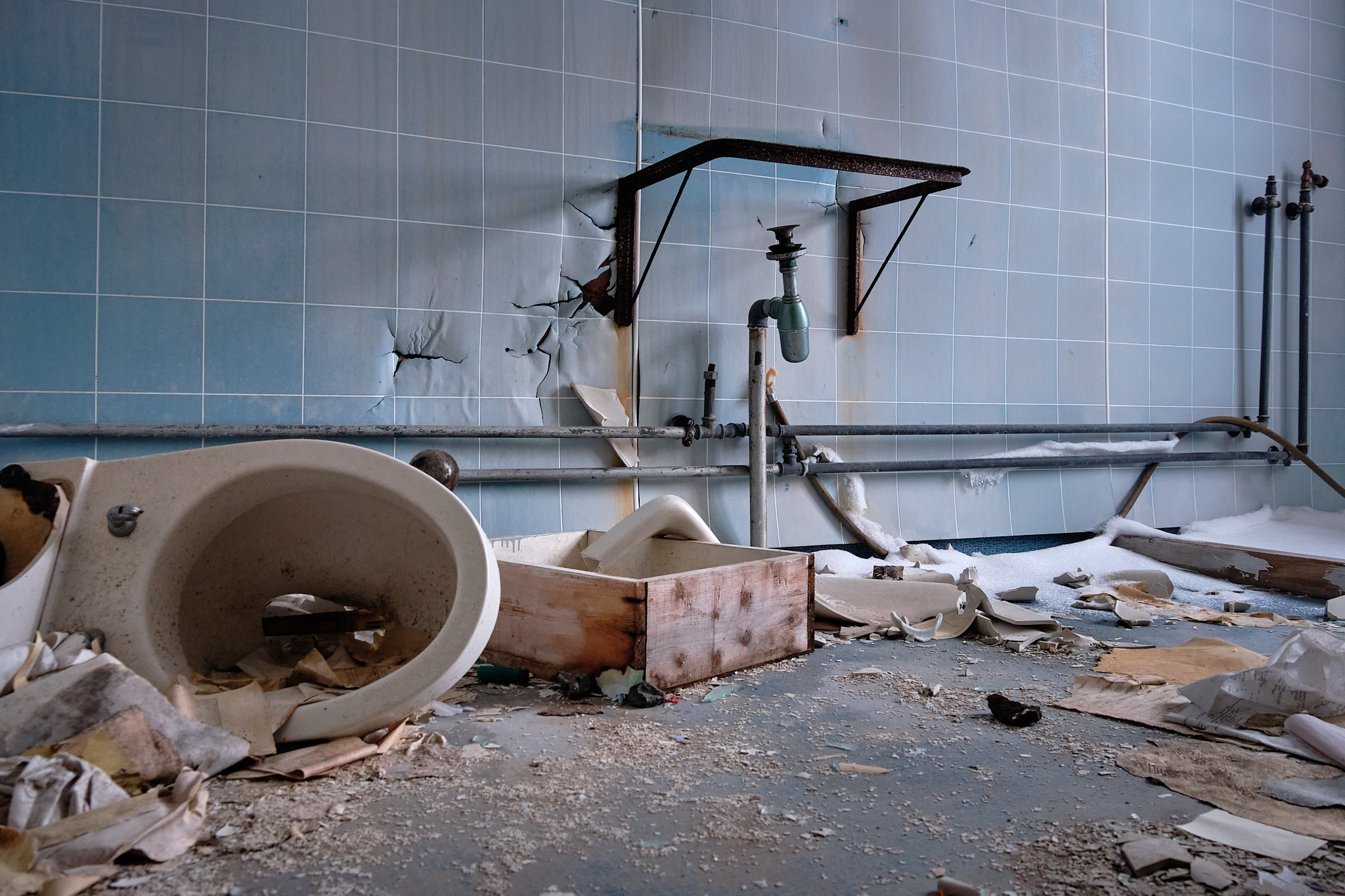 Next up was the community hall, with it beautiful, wood-lined main hall, complete with stage and podium.

And then the Seamen’s Home – a hotel where visitors could stay.

Inside was industrial kitchen equipment, a few scattered tables in the old dining hall with a piano slowly disintegrating in the corner, bedrooms (some with furniture still in them), and long spooky corridors. 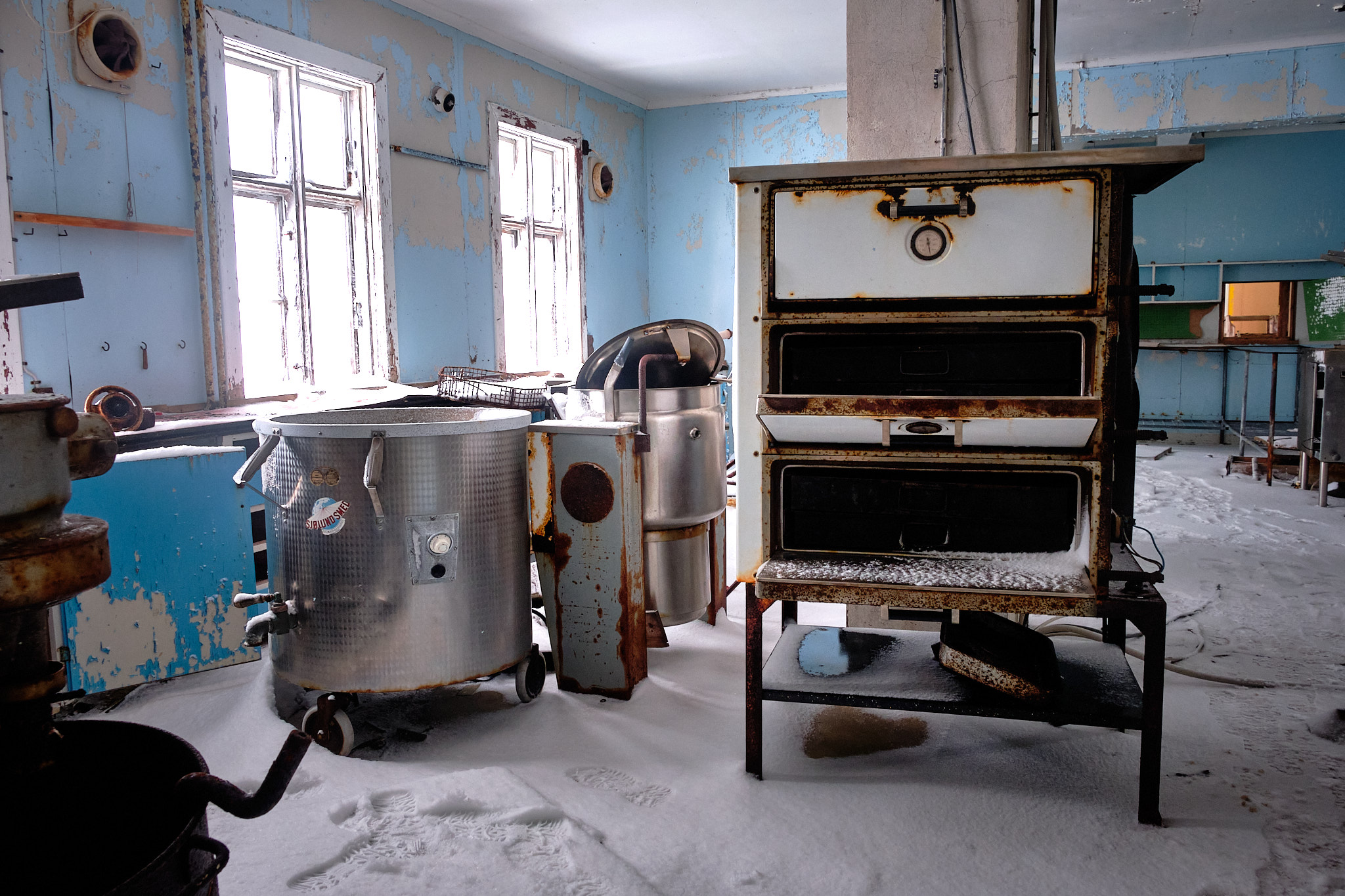 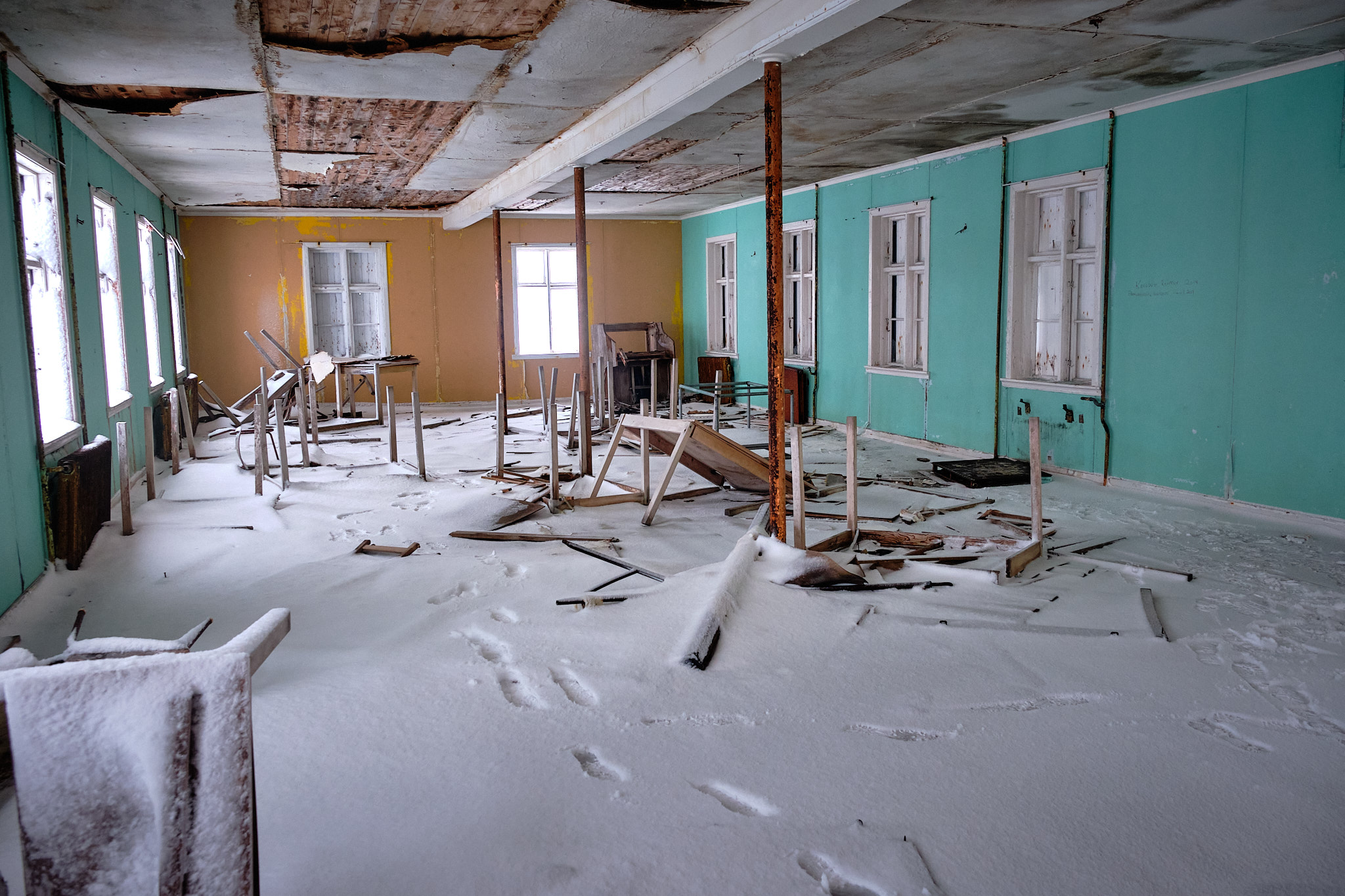 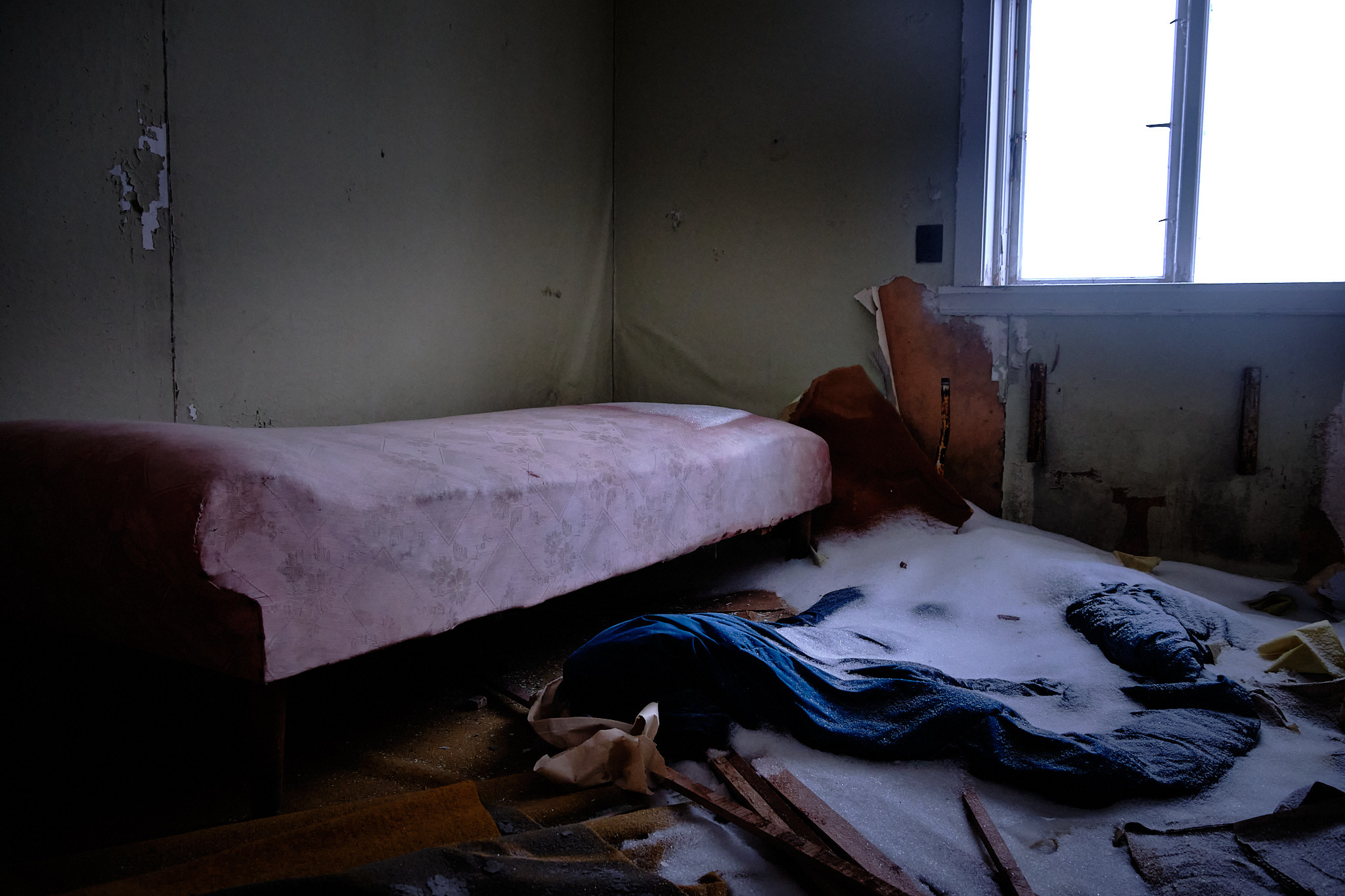 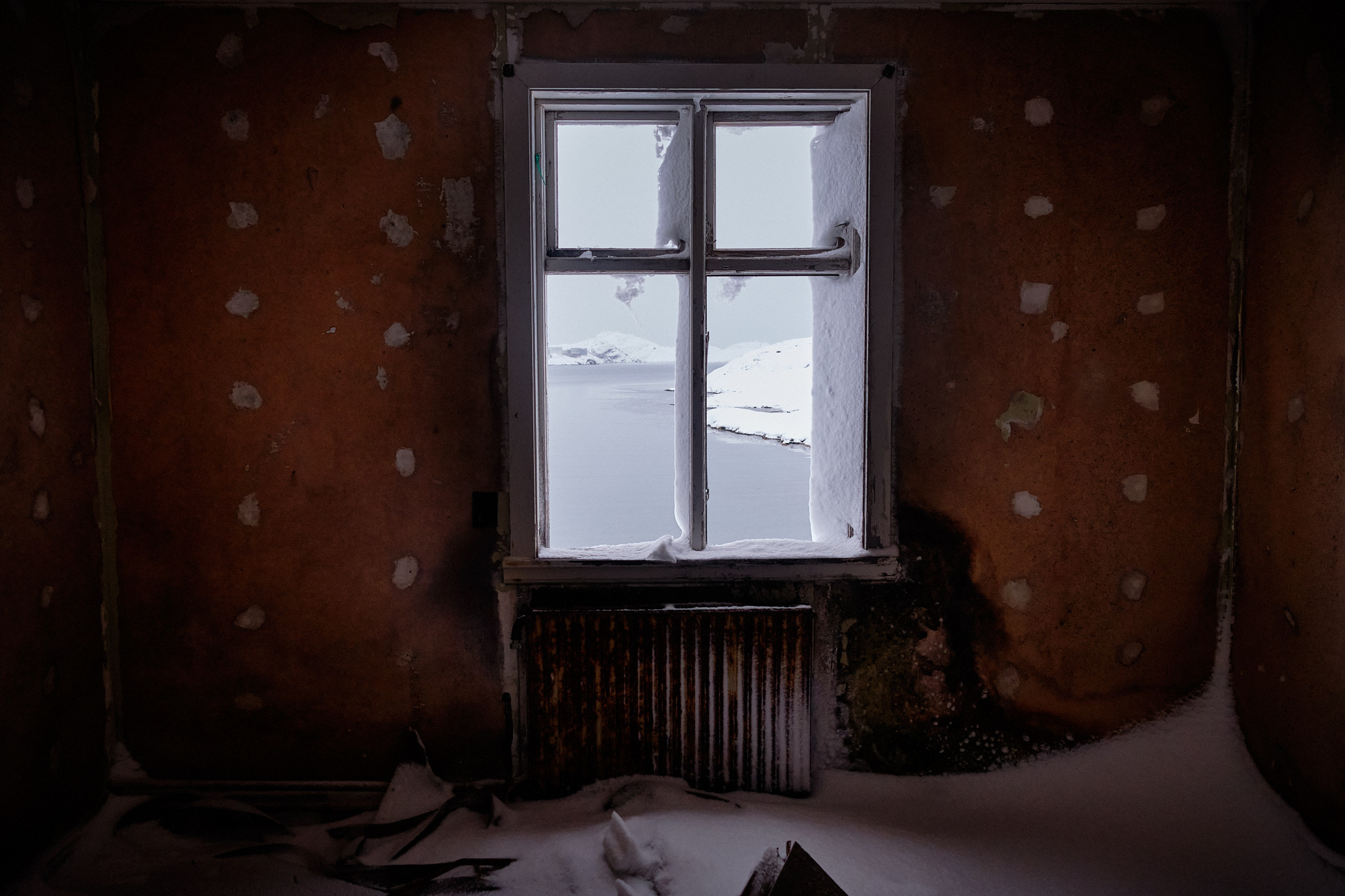 Tell me this doesn’t look like the perfect place for a horror film to be shot! 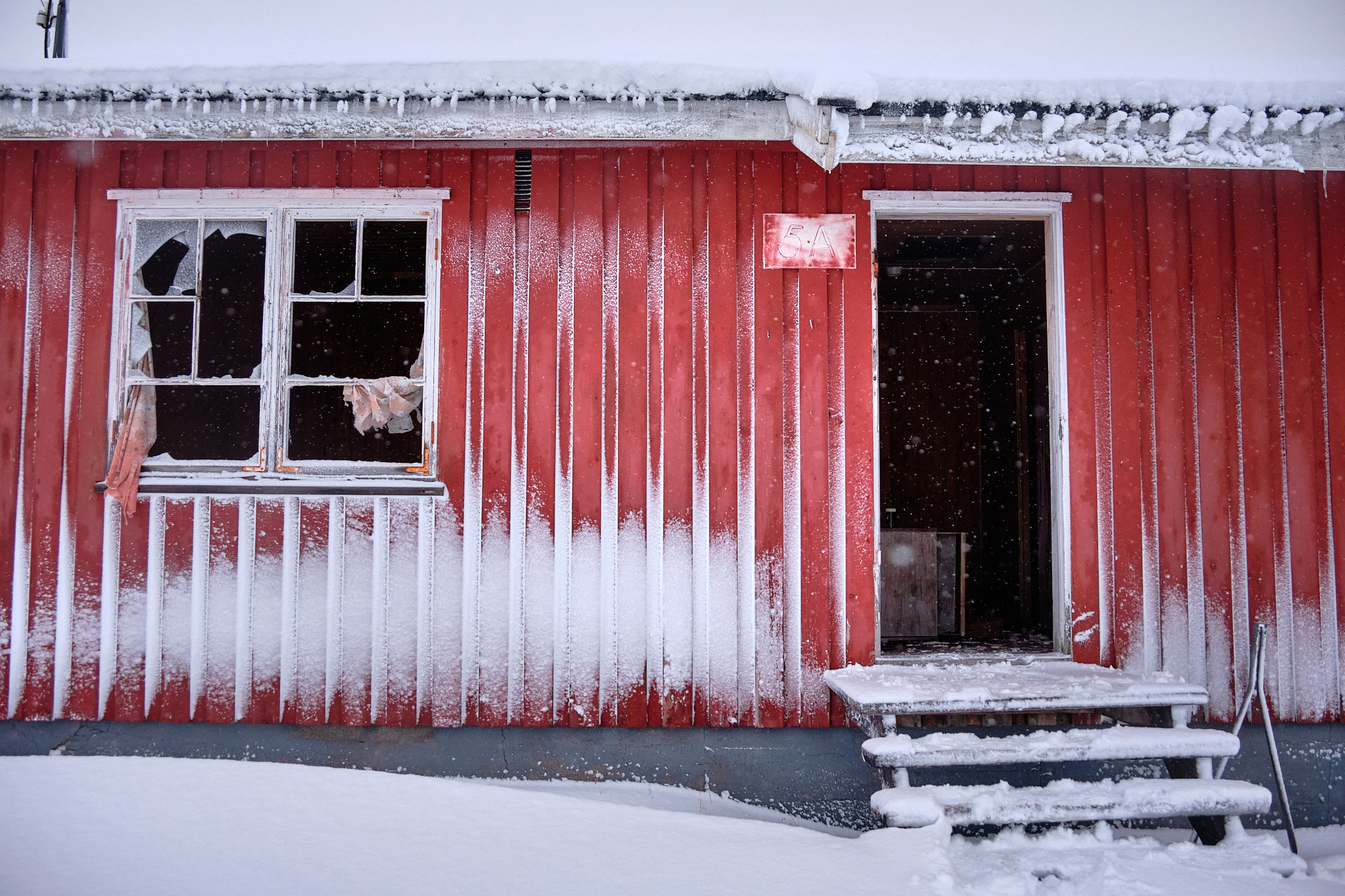 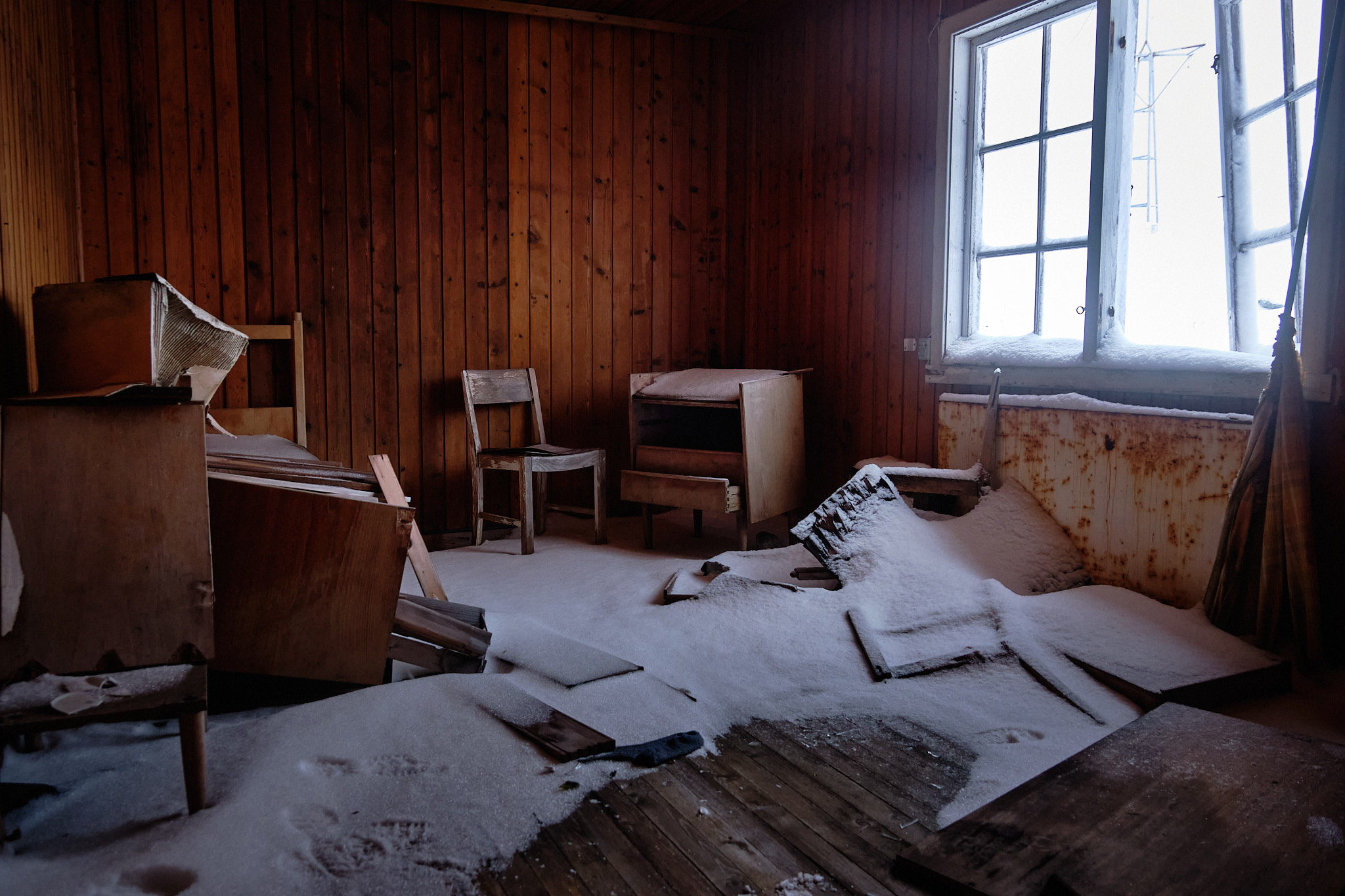 before heading over to the factory area through the now reasonably heavy snow.

Here, I stopped for a moment to let the others go ahead. As I stood in the falling snow – I could have been the last person on Earth – such was the deafening silence of this abandoned place where we were the only visitors.

The buildings that make up the processing plant are numerous and vast. We didn’t get to see everything – but it seemed as if we found the inhandling area, the packing area, the machinery room, one of the large freezer houses, and the workshop. 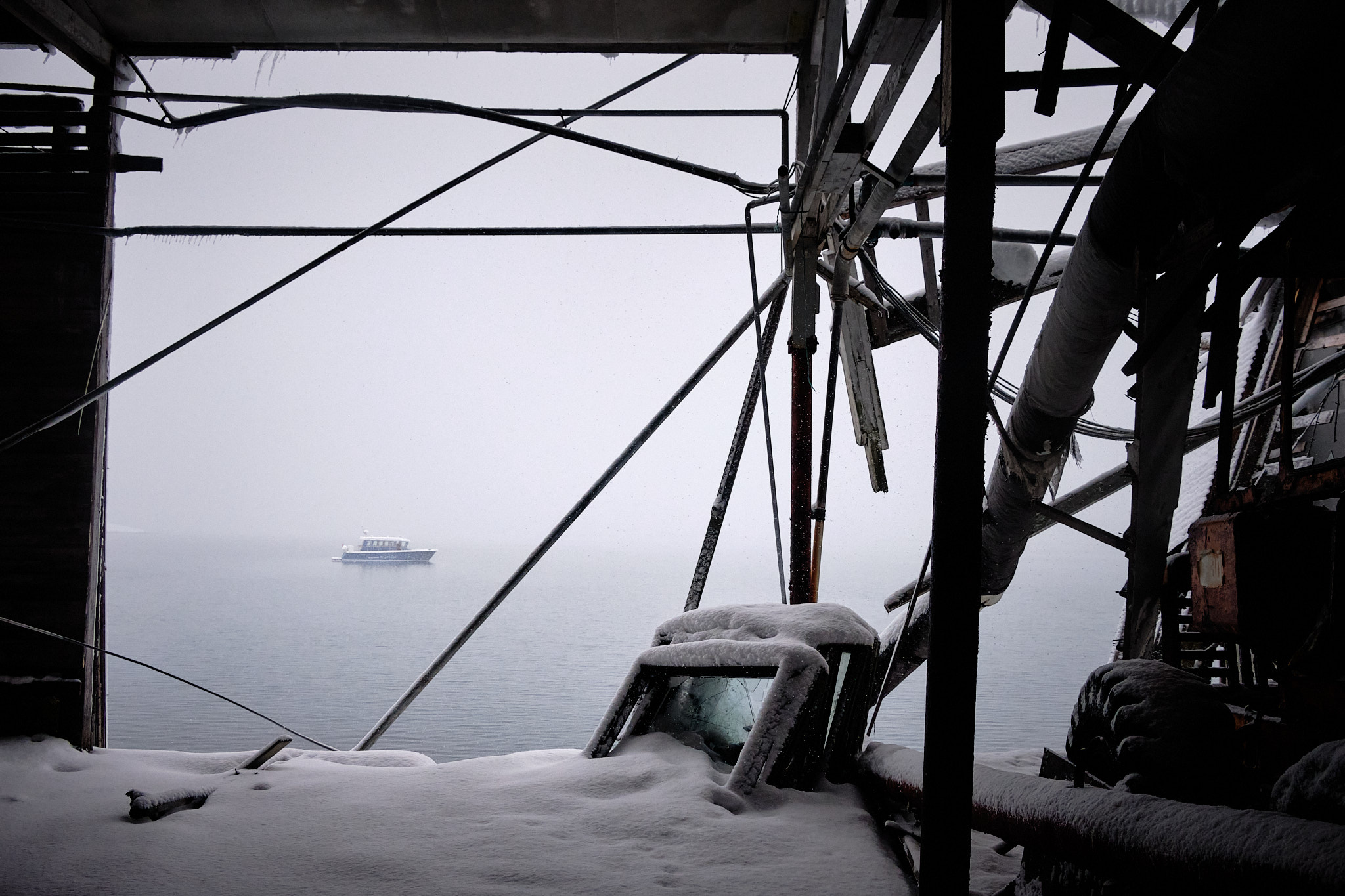 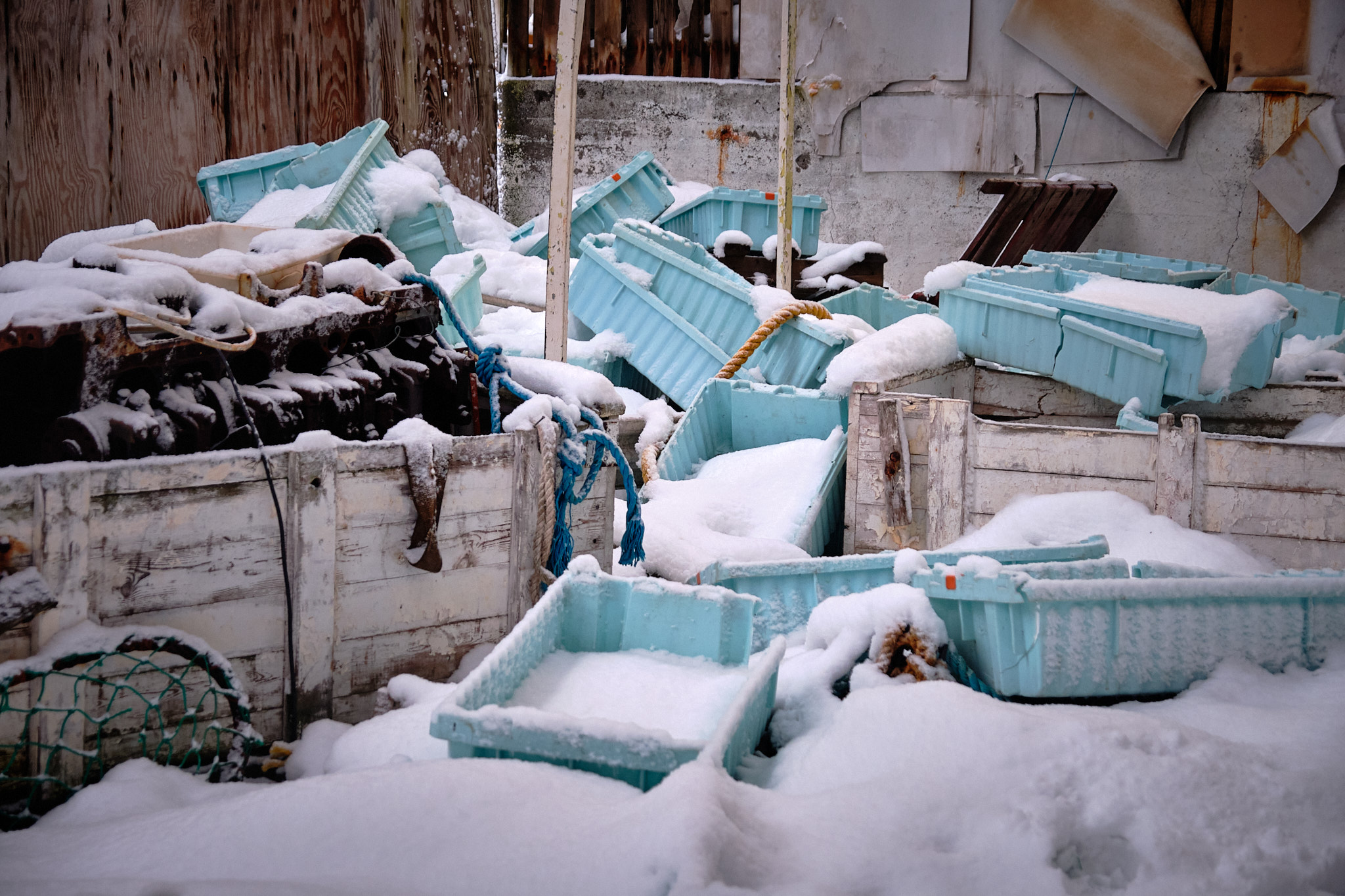 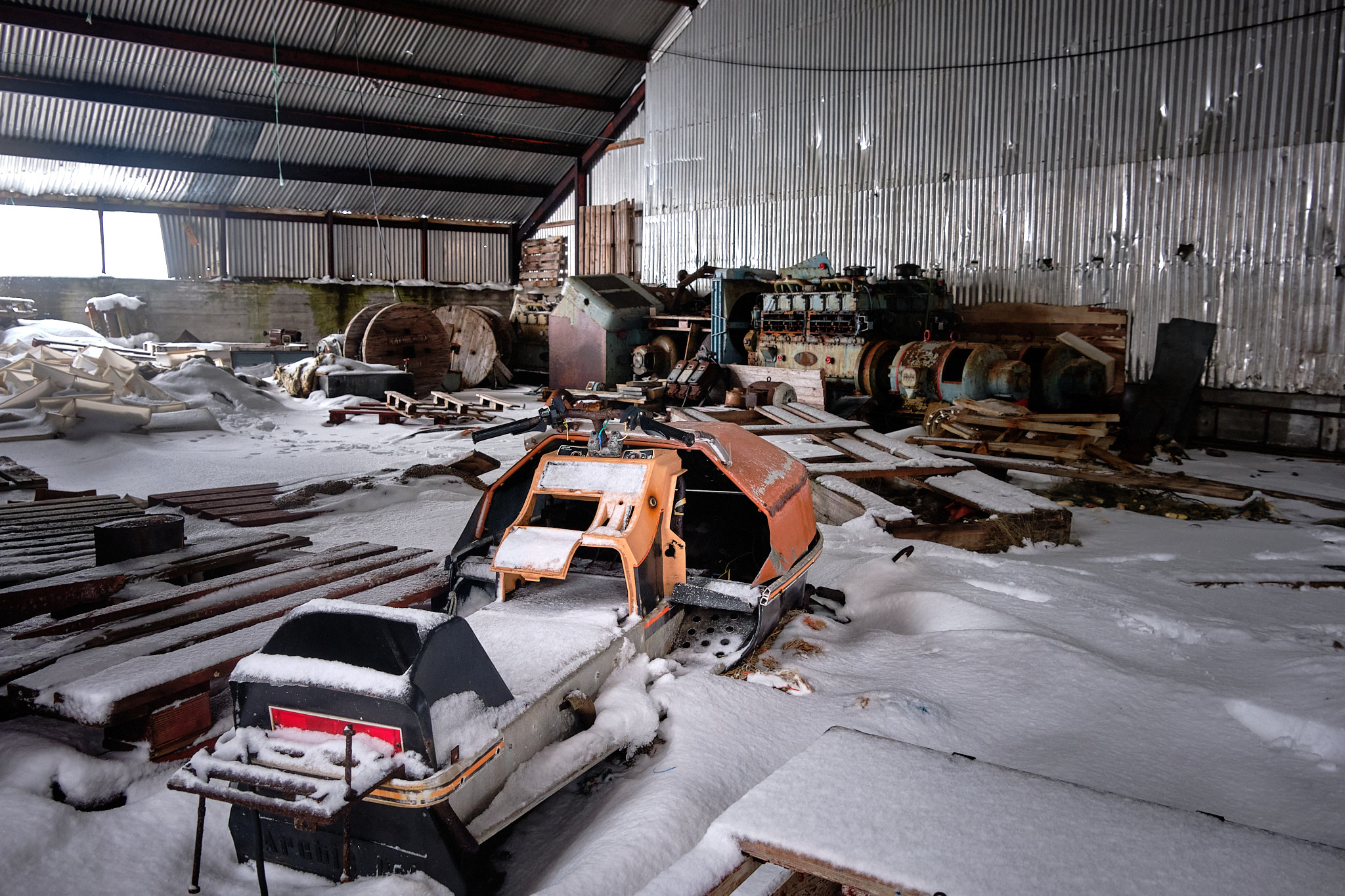 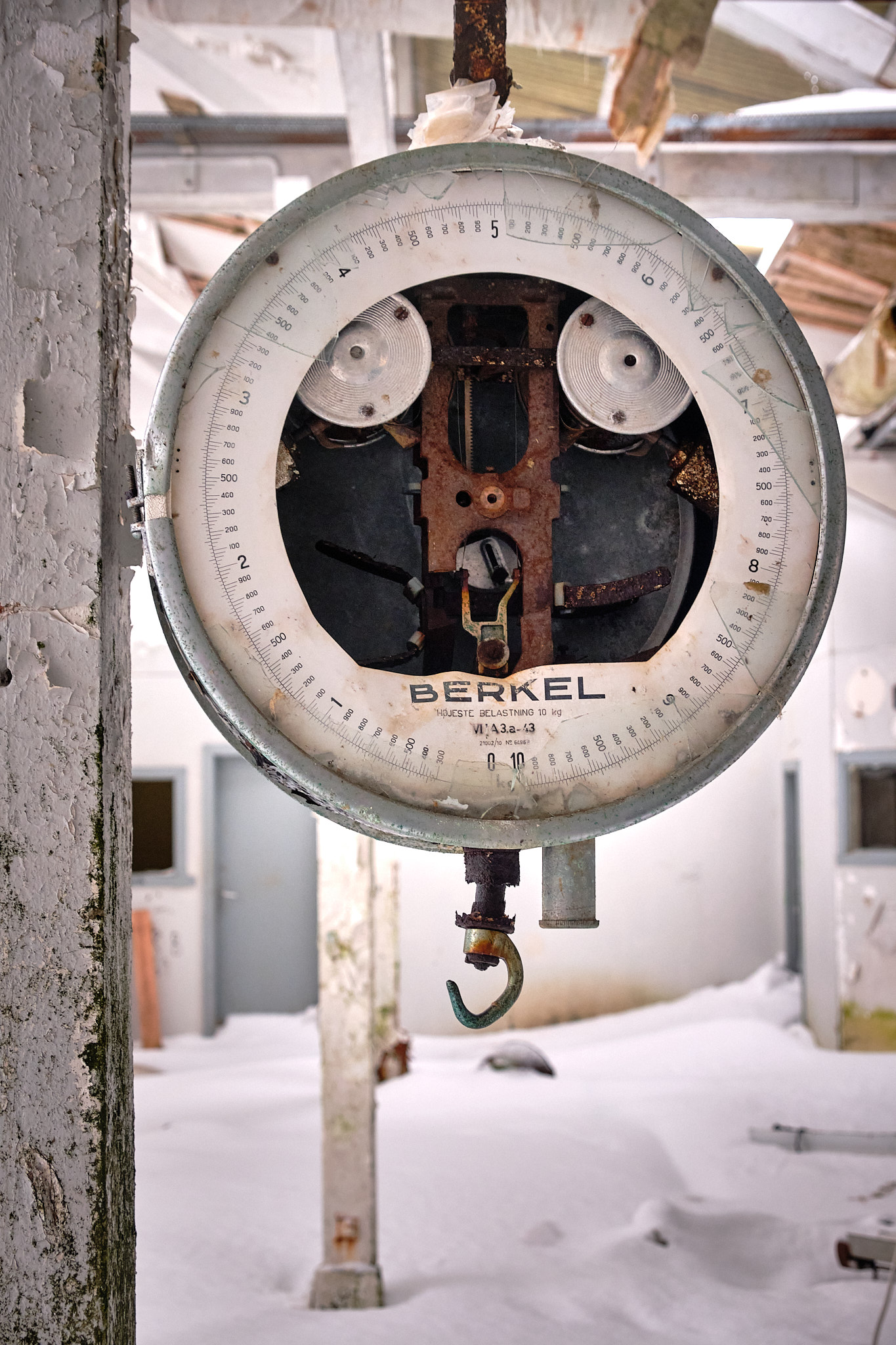 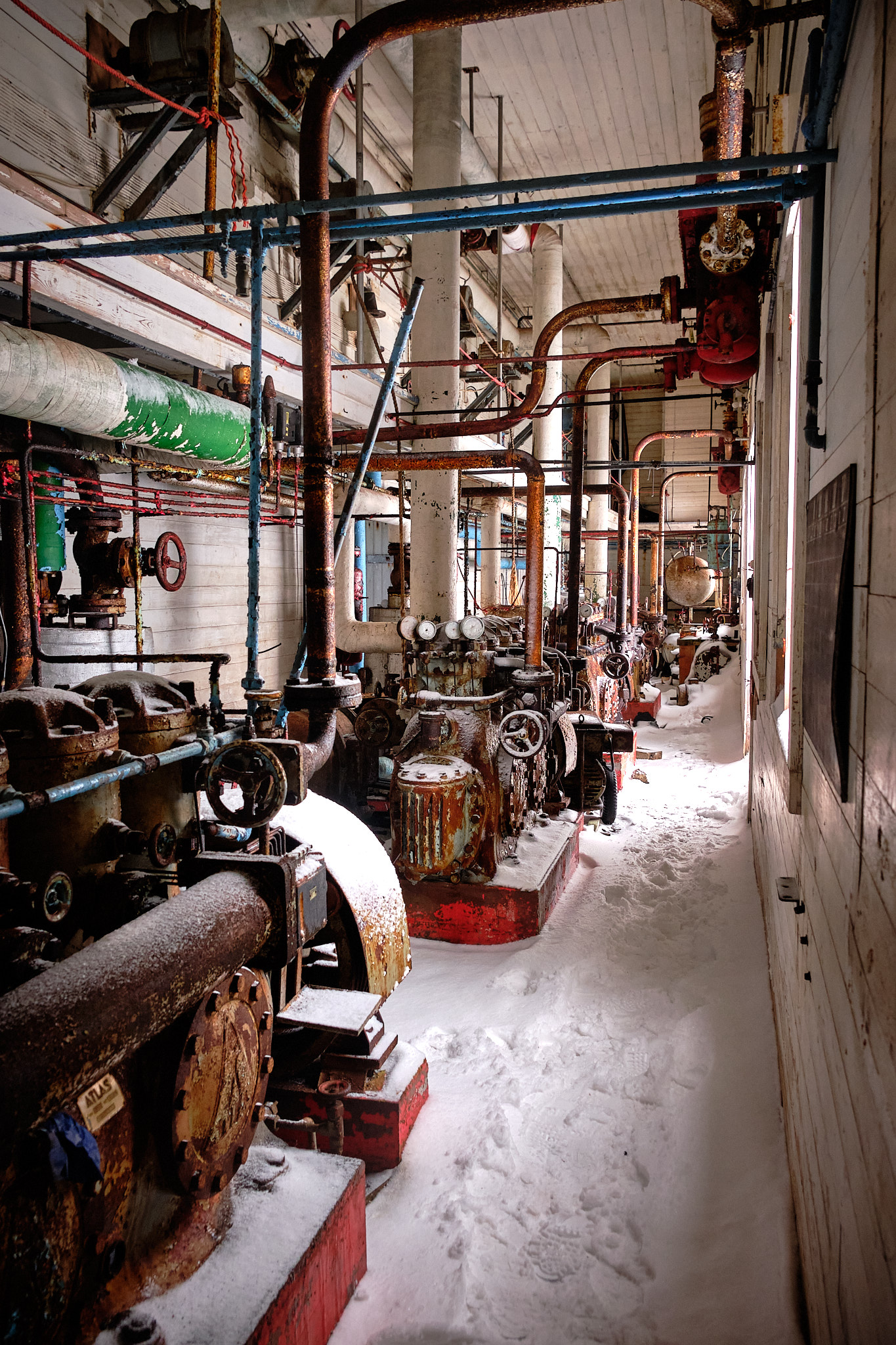 We probably spent about an hour exploring these buildings, keeping well away from their front wall which used to adjoin a large quay. Now fallen into the fjord, we didn’t want to follow in after it! In fact, we were a little wary the whole excursion and followed in each other’s footsteps for the most part, as the snow made it impossible to tell if there was solid ground beneath us or only a decayed part of the building that we would fall through.

I particularly loved finding bits and pieces that were stamped with the factory’s name and which showed the “daily life” of the plant. 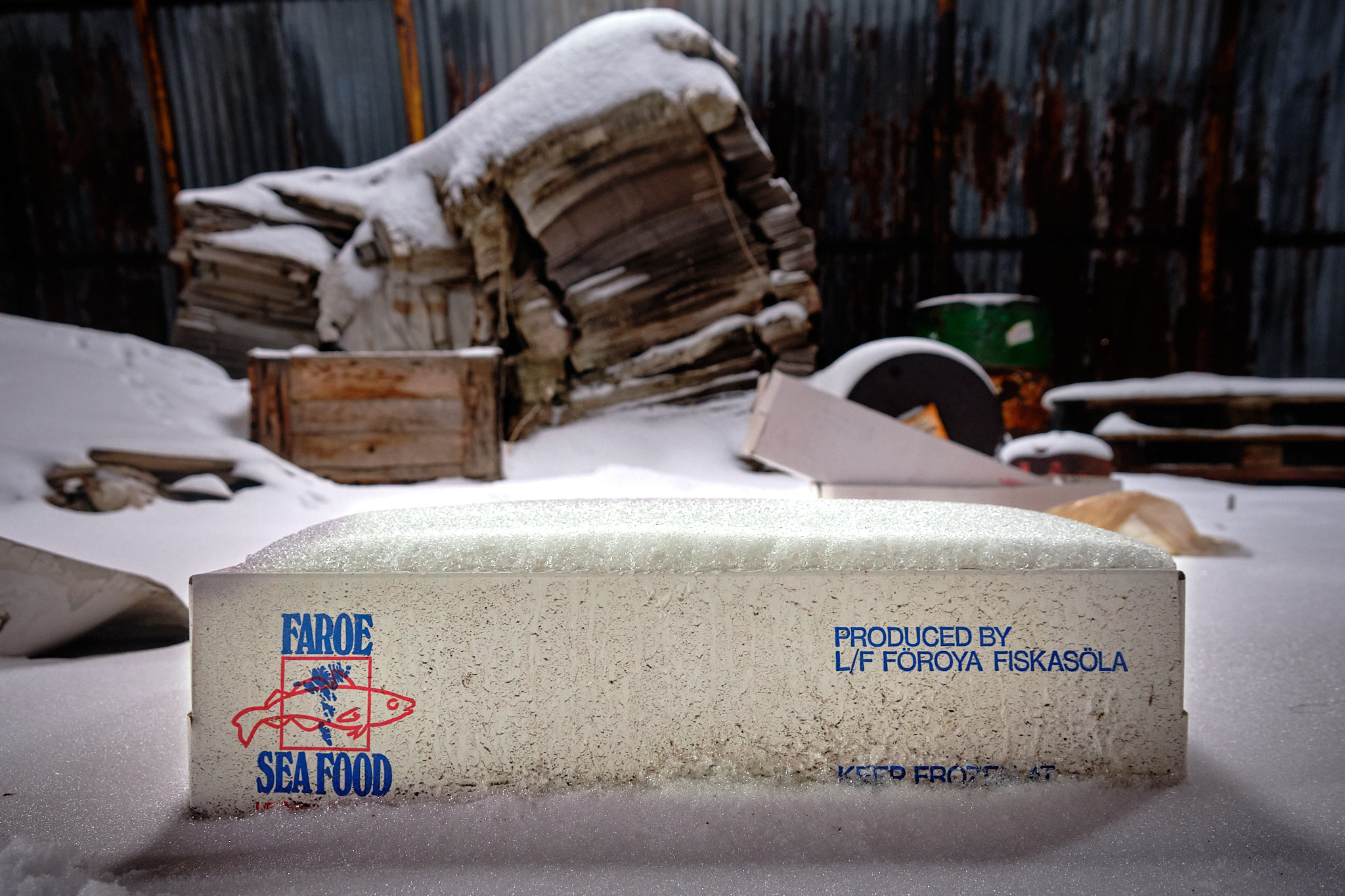 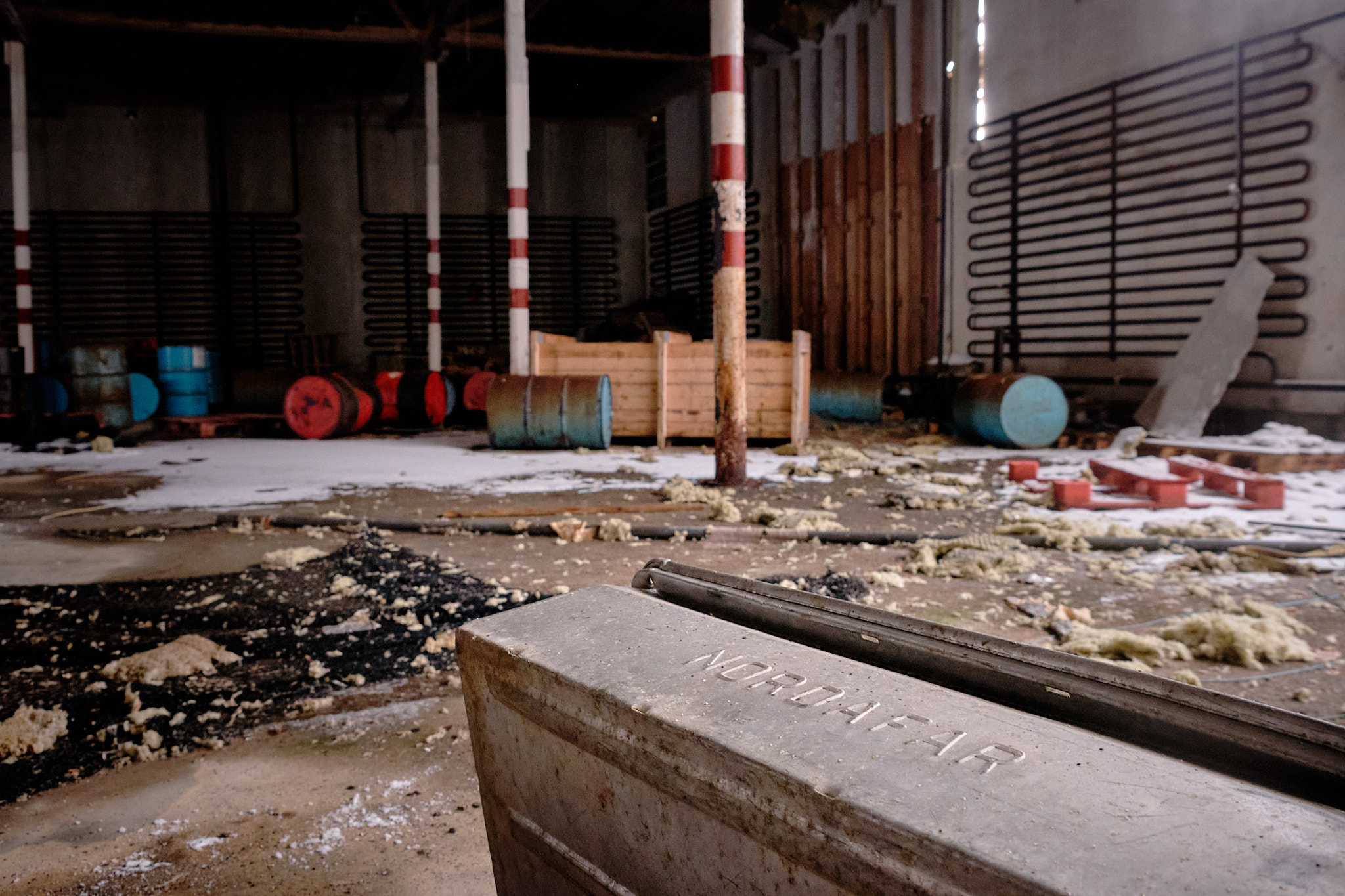 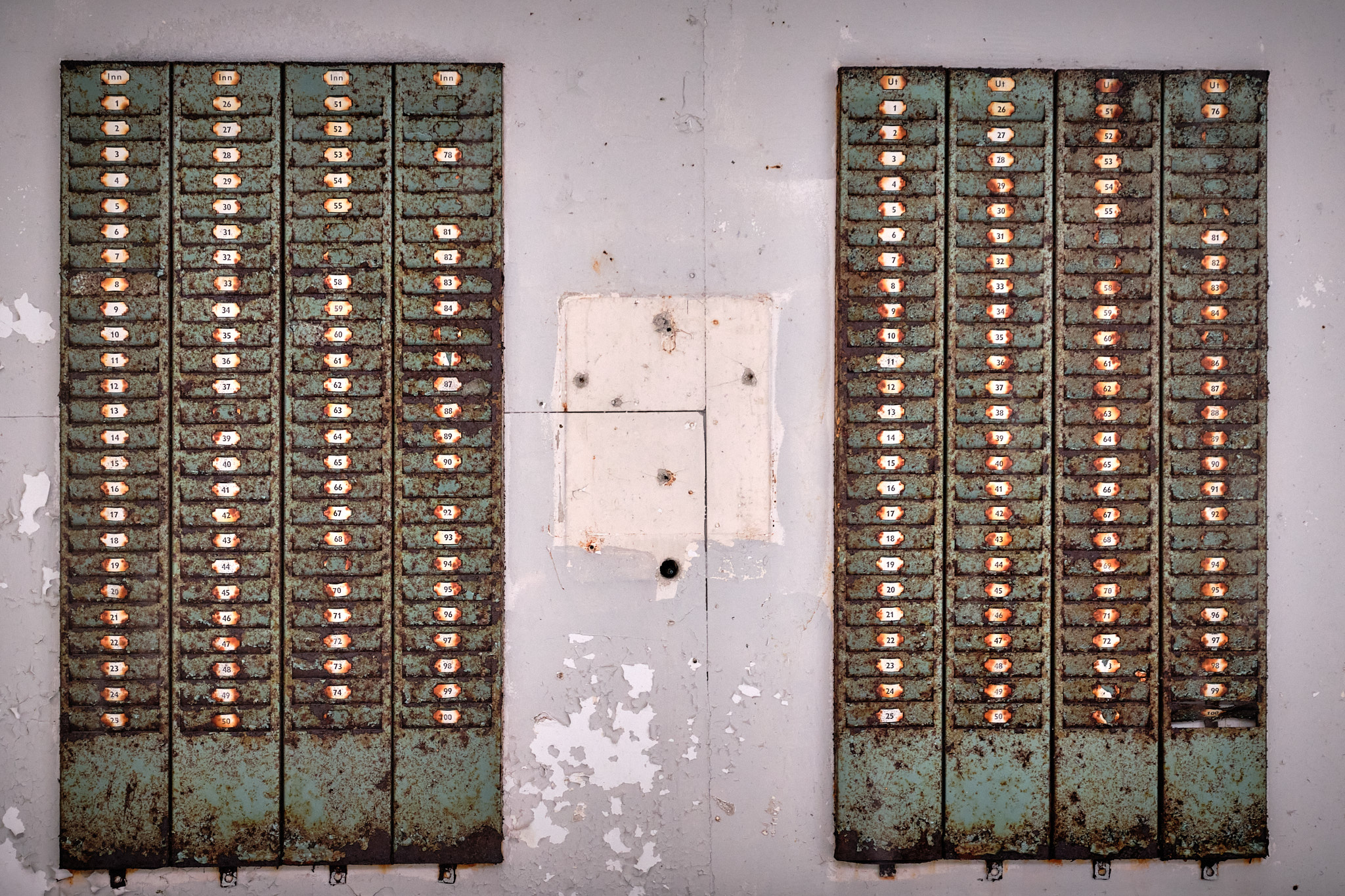 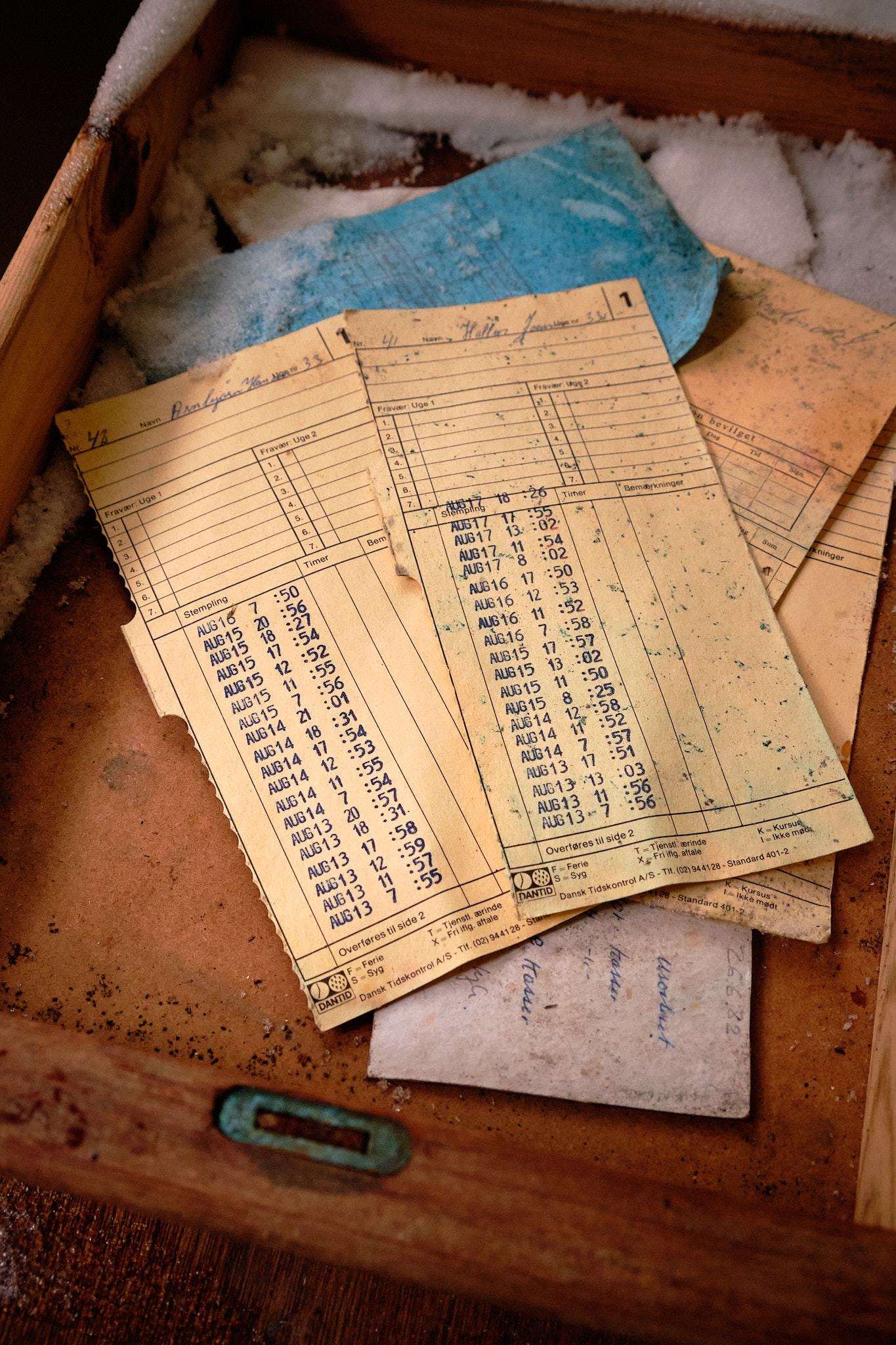 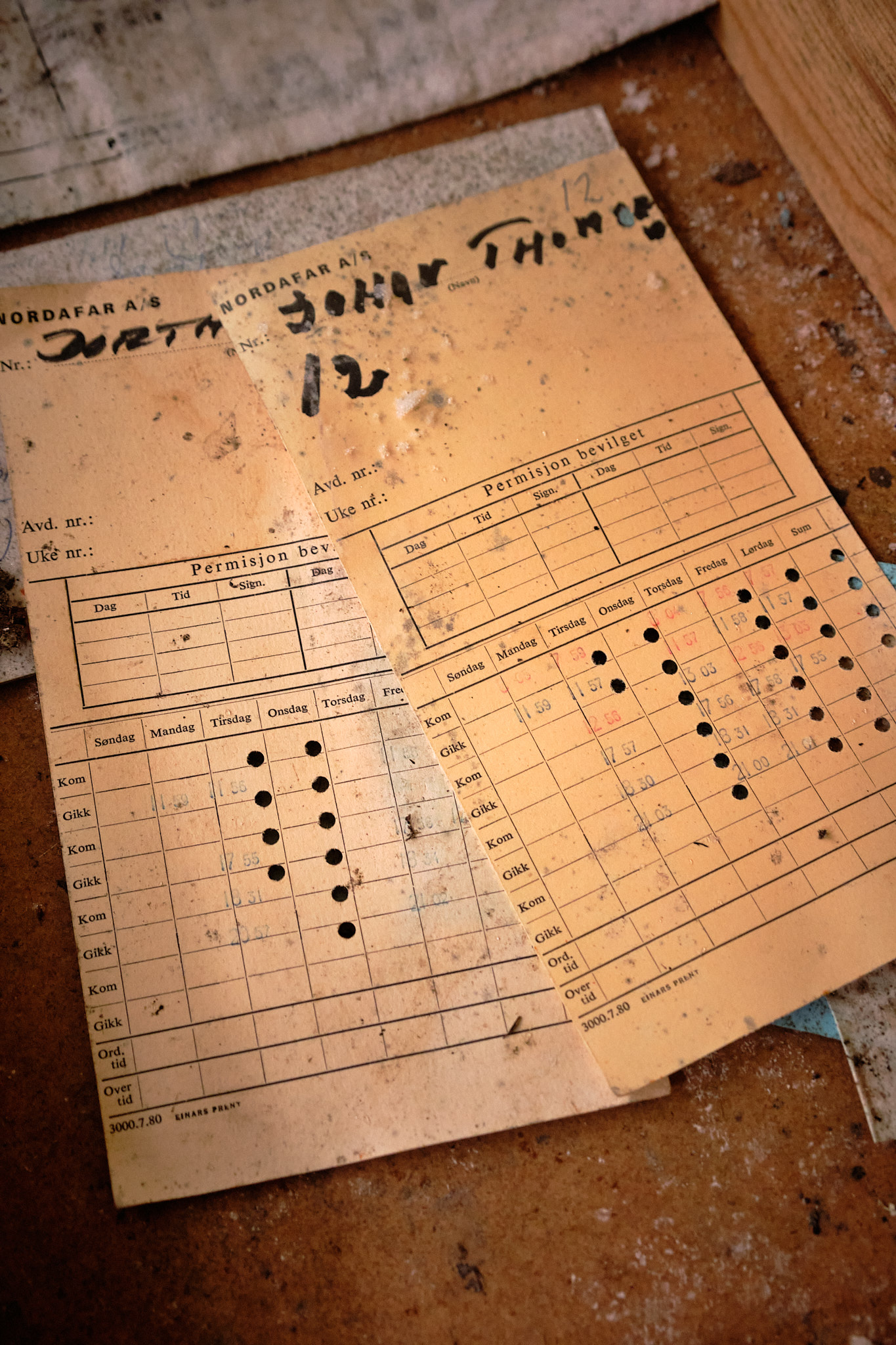 All up – we spent 2 hours exploring the site. This is nowhere near enough time for a photographer and a lover of abandoned places, but is a good amount of time to see most of the key parts of Nordfar.

Back on board, we carefully backed away from our “docking” place through the thin surface layer of sea ice

and watched as the derelict buildings of this abandoned ghost town disappeared into the falling snow.

A surprise on the way back to Nuuk!

On the way back to Nuuk, the snow was heavier and there was even less to see than on the way out. But our eagle-eyed captain Uli had spotted a water spout in the distance, and we changed course to take a closer look.

It was a Humpback whale!

December is extremely late for a Humpback whale to still be hanging around in the waters of Greenland (they migrate to warmer waters during the northern winter) so this was a special treat indeed! We followed at a respectful distance for about 20 minutes, watching this graceful giant of the sea. Then, with a final flick of its tail, he bid us adieu and dived – leaving us to continue our journey back to Nuuk.

Explore the Nordafar for yourself

Visiting Nordafar is possibly my favourite excursion from Nuuk. Unfortunately, it does not run very often, and even this trip had been postponed twice due to bad weather. But if you get the chance, you should definitely go see it for yourself – especially as there are plans to demolish the site and clean it up in the near future.

Although we had 2 hours to explore on this excursion, I could have easily stayed 2 days! There is so much to see, and I’d love to return in Summer when other elements that were hidden under the snow on this trip would be revealed.

Thank you Greenland Cruises for an amazing trip!

If you are planning a trip to Nuuk, I recommend reading the Ultimate Travel Guide to Nuuk.