Greenland is one of the best places in the world for Arctic Char fishing. The Arctic Circle region between Sisimiut and Maniitsoq features innumerable pristine rivers in which these prized fish spawn, and July – August is the height of Arctic Char fishing season.

I was keen to fill my freezer with these wild trout, so I booked a fishing weekend at Sassannguit with West Greenland Wildlife.

Sassannguit is a small fishing camp owned by Leif and Agathe Fontaine. It is located about 1.5 hours sailing south of Sisimiut, almost right on the Arctic Circle itself.

We met Leif at the marina where he was loading up his Targa 25 with supplies from Sisimiut, then headed south under gorgeous blue skies. 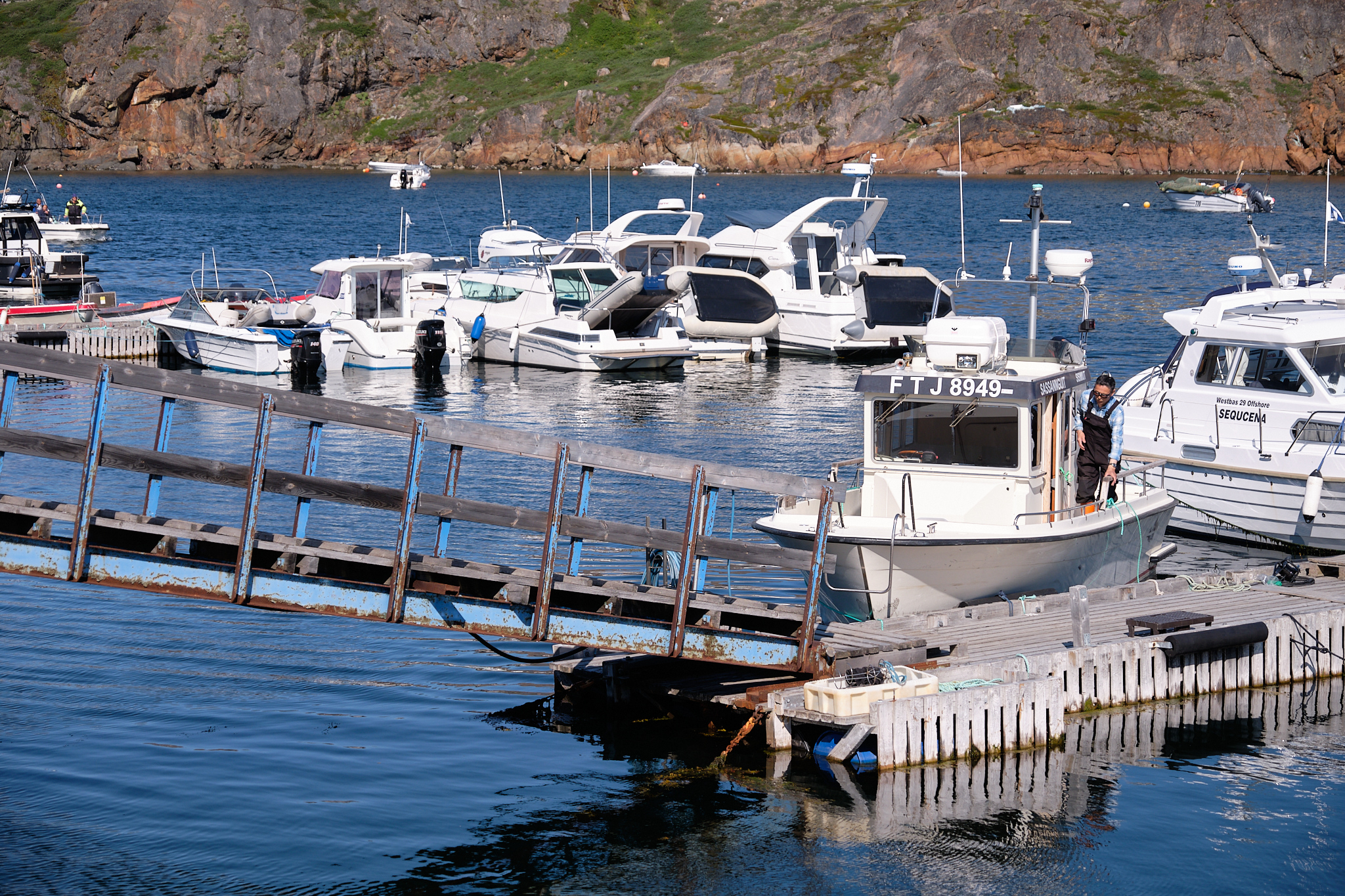 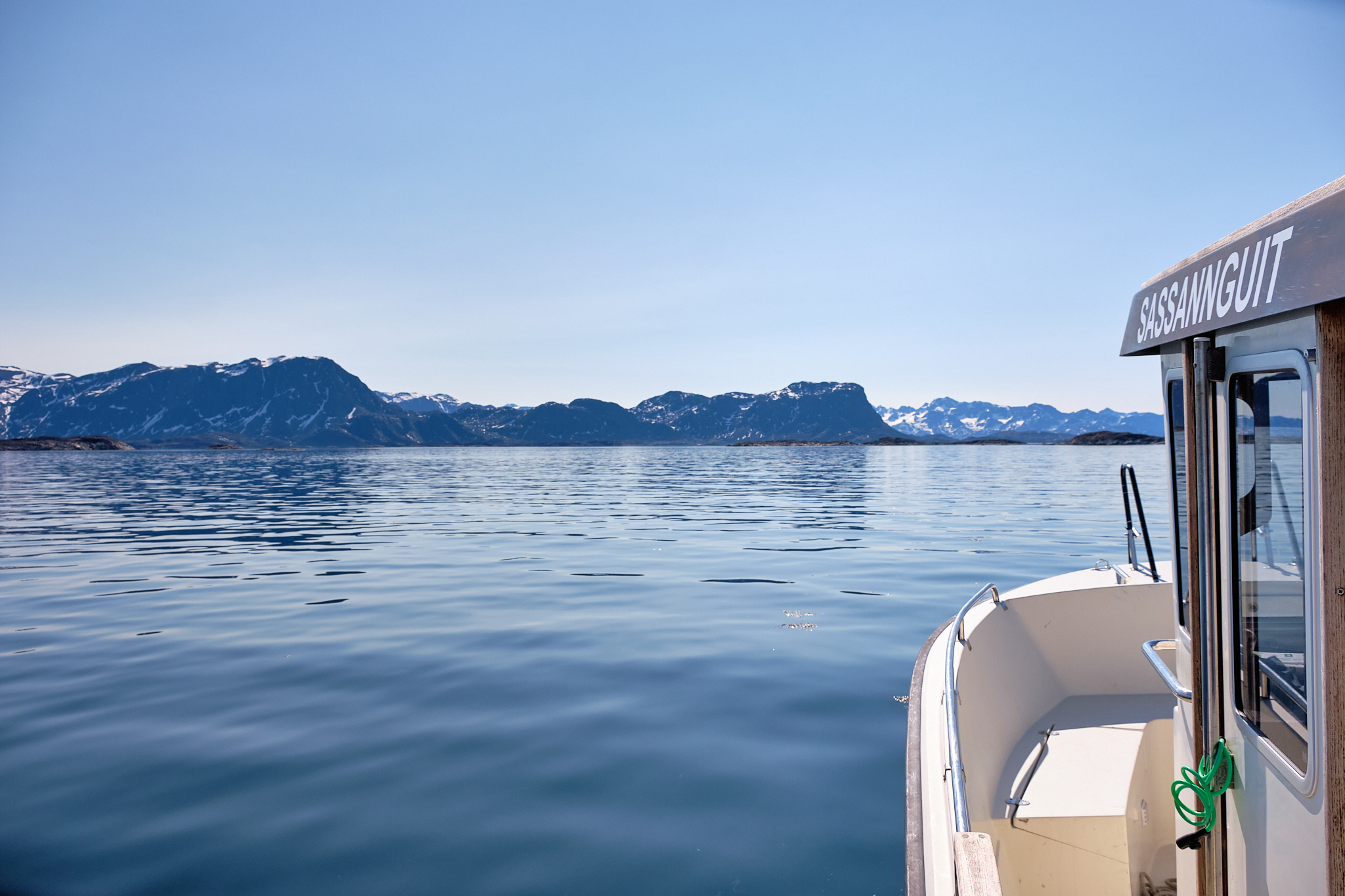 It was such a glorious day!

After about an hour of sailing, we stopped at the small settlement of Itilleq for a coffee break just floating near the dock. Here, Leif told us a little about the settlement and also a little of his own history. We were in good hands for our fishing adventure as he used to be chairman of the Fishers and Hunters Association of Greenland and also the Greenland representative of the International Whaling Commission for many years. 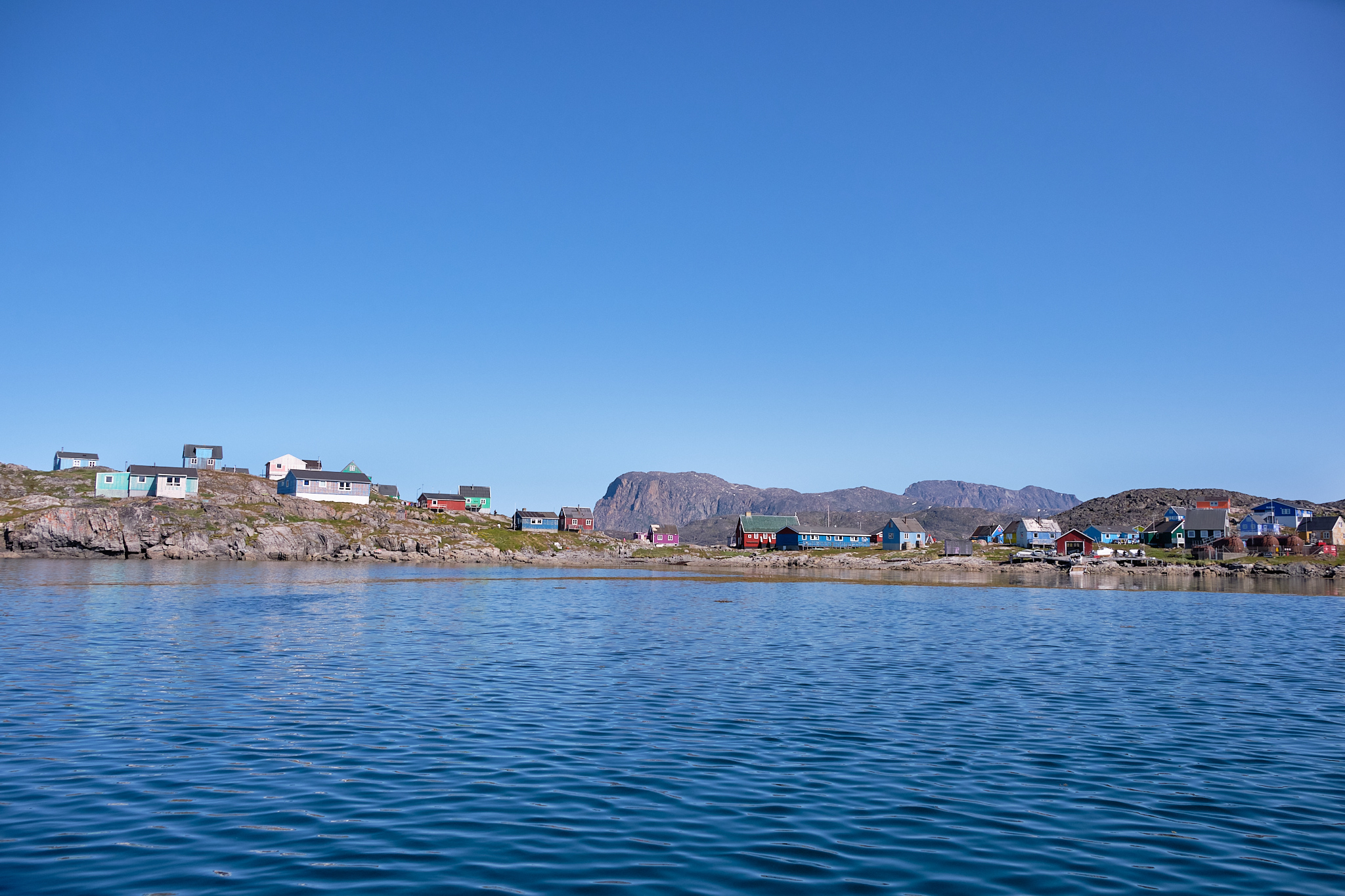 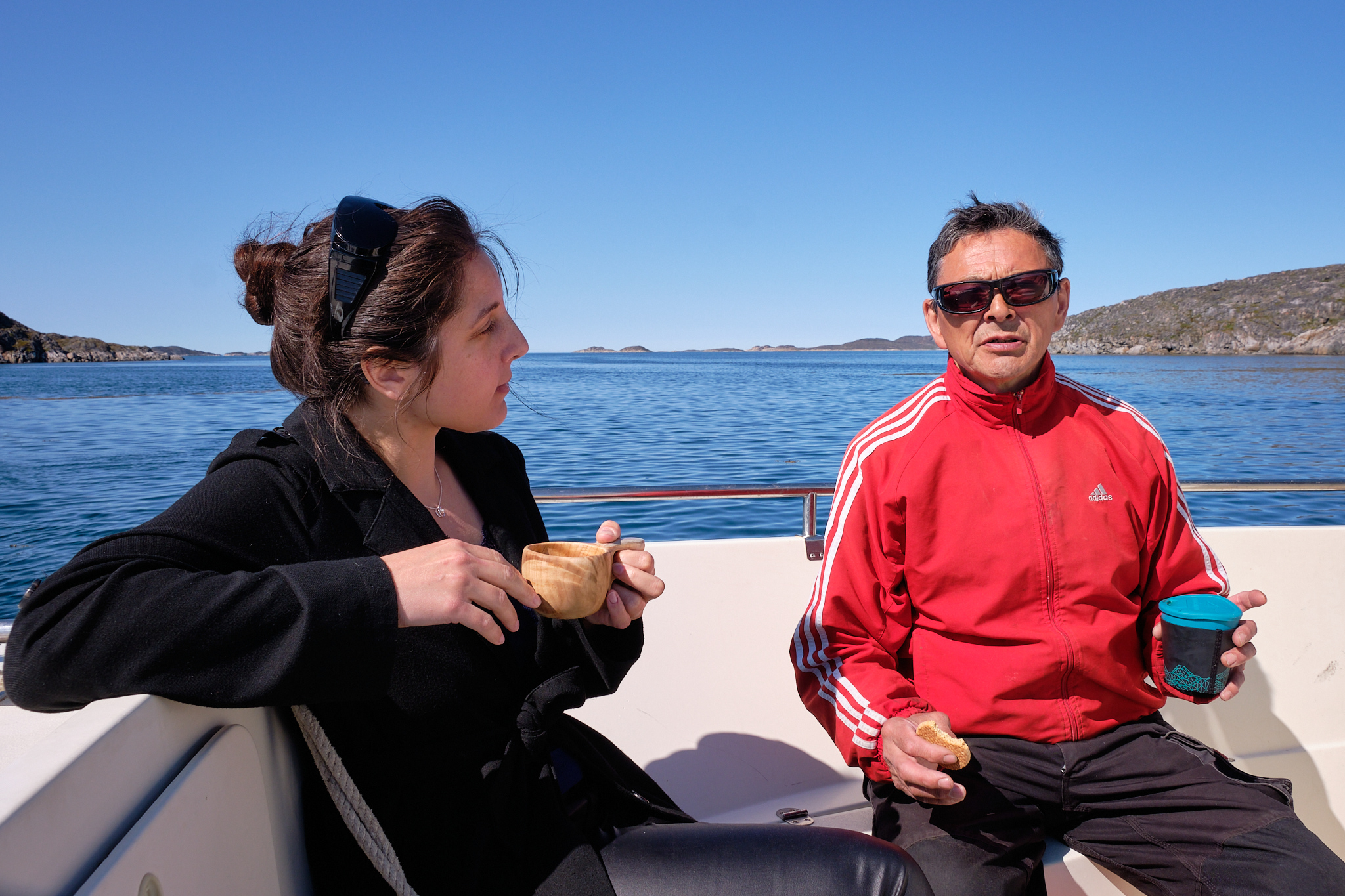 Itilleq has a population of fewer than 100 people. Its main industry is fishing.

We continued south for about another 30 minutes before arriving at a point where we had to swap out of the Targa, and into a much smaller boat. This was because the access route to the camp is very shallow and, even with a small boat, only navigable at high tide. Something that we would see a little later. 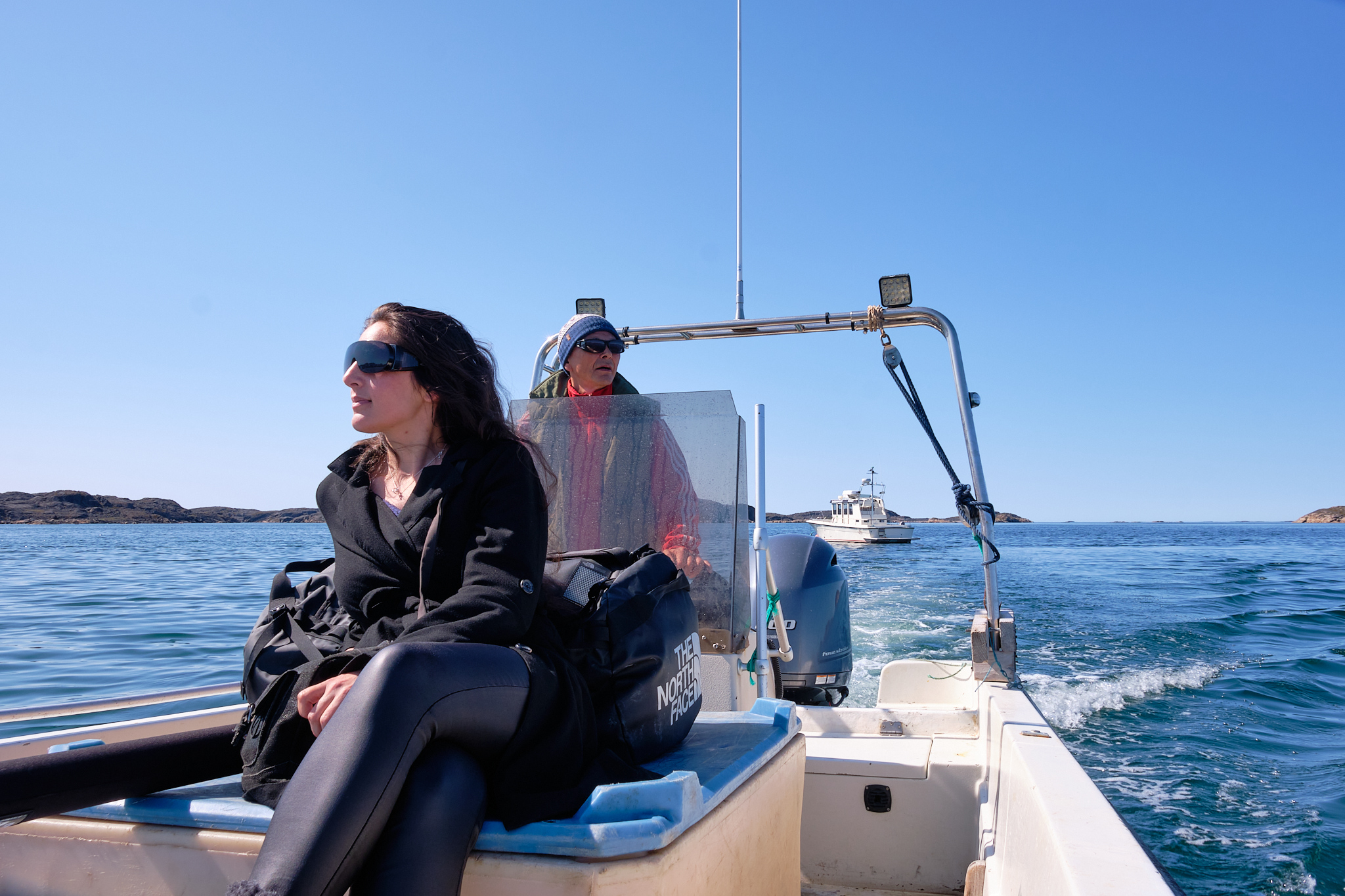 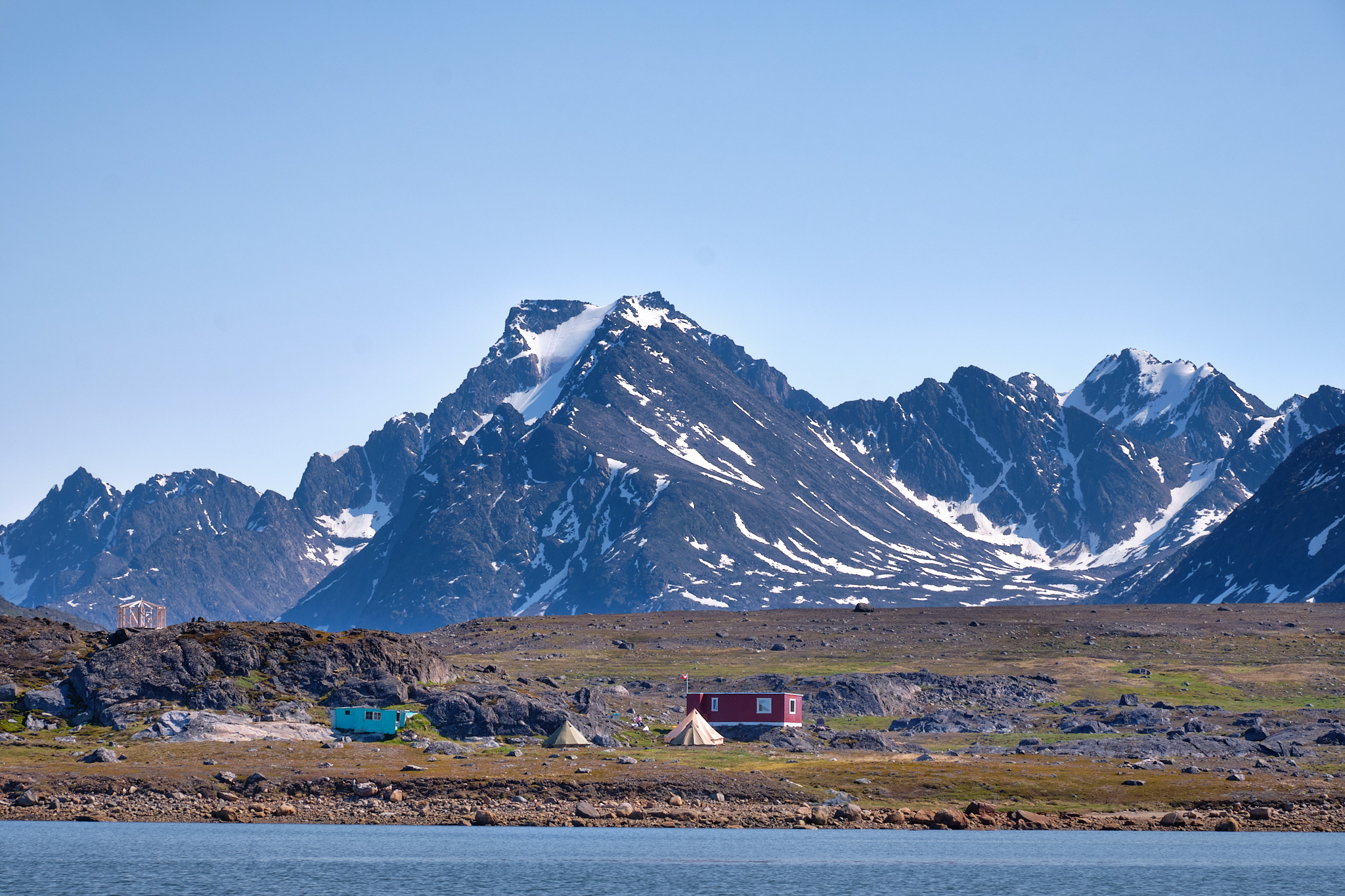 Whenever I camp, I’m usually hiking for many days and carrying a small, lightweight, 1-person tent with me. Everything must fit in my 65L backpack, and my bathroom is the great outdoors – no matter the weather.

The camp has 2 large tents set up that normally sleep 10 and 8 people, as well as a “bathroom tent” complete with porta-potty. Given there were just two of us on this occasion, we each took our own private tent where Leif and Agathe had even set up camp beds for us! Luxury! I took the tent with the musk-ox skin decoration, Judith the one with the polar bear skin. 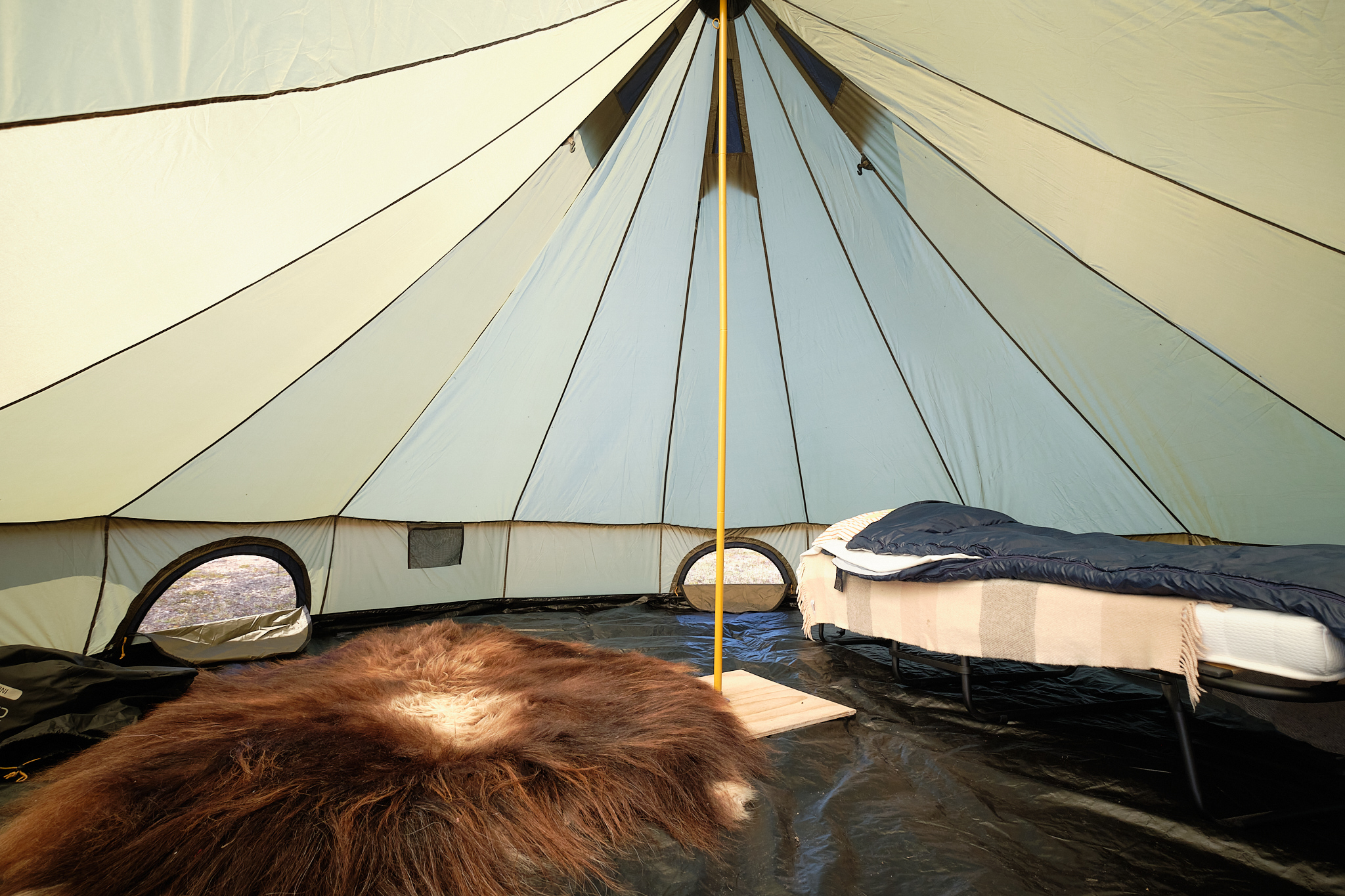 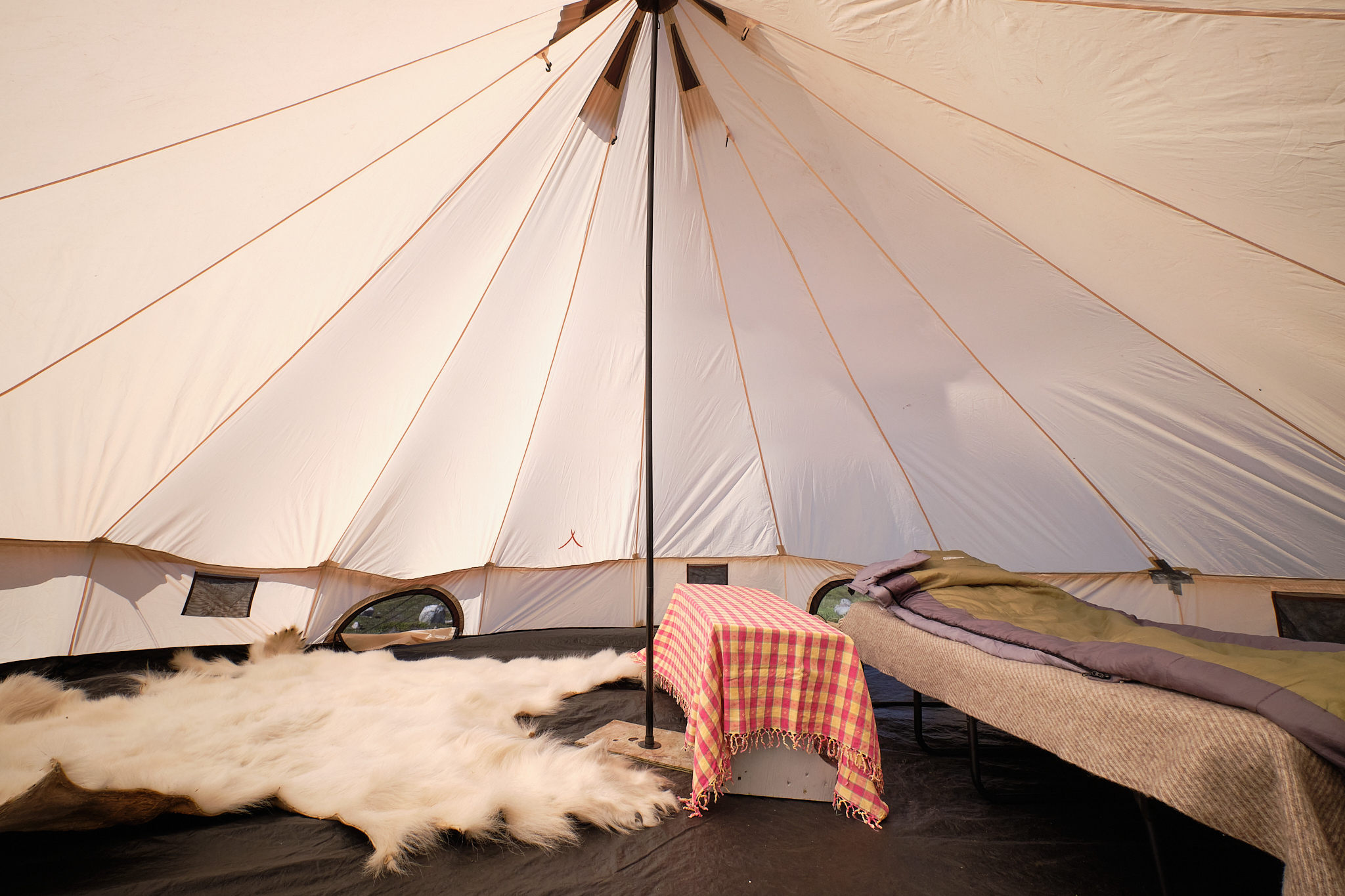 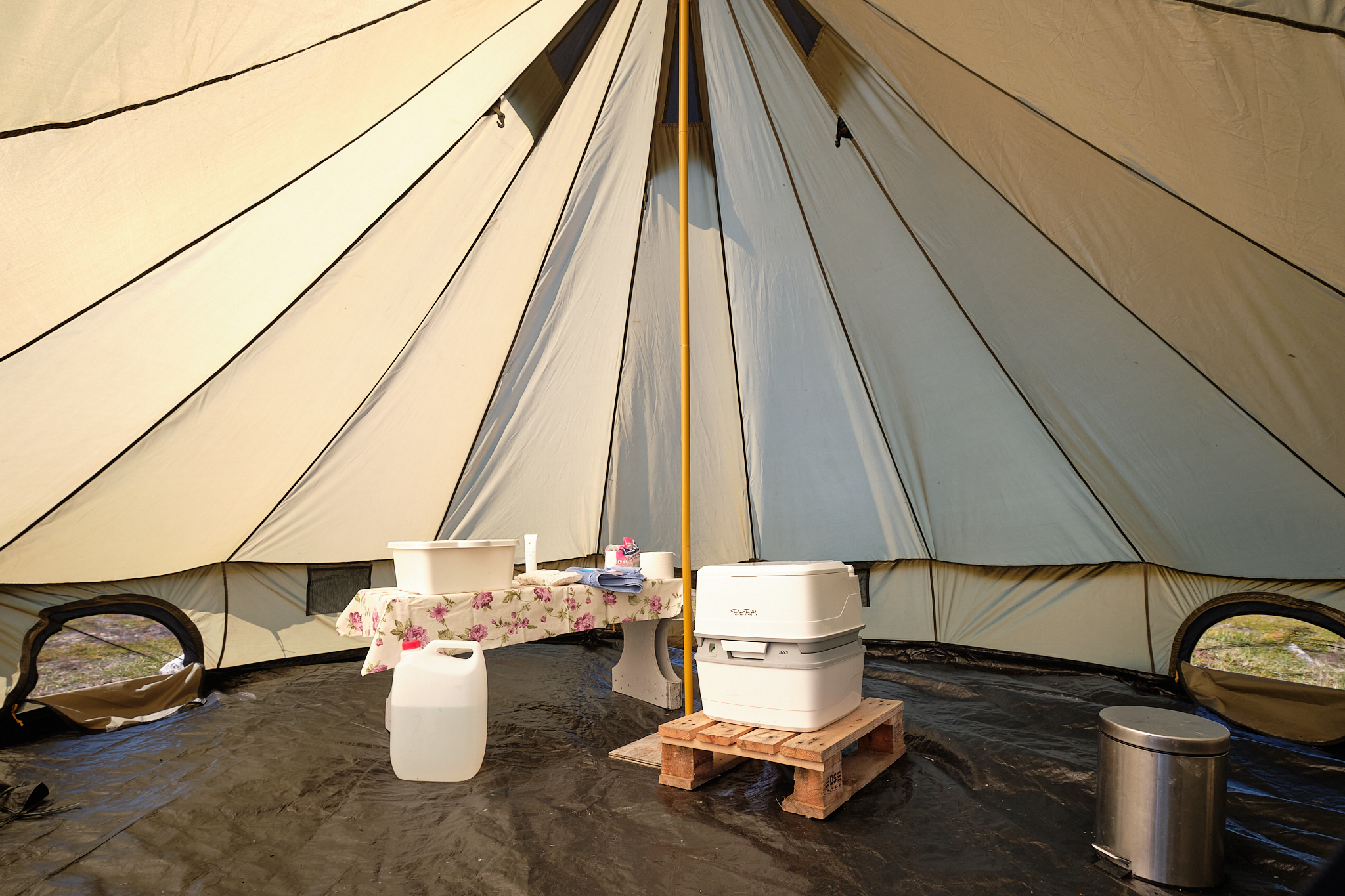 Musk-ox tent (top), polar bear tent (middle) and the bathroom tent (bottom) complete with a porta-potty that really looks like a throne 🙂

Once we’d settled in, it was time for lunch.

Meals are taken together with Leif and Agathe in their cabin located just behind the tents and mostly traditional Greenlandic food is served. For this first lunch, we had bread and condiments alongside a selection of winter-dried cod, dried Minke whale, and salted Minke whale blubber.

Whale is a very important part of the traditional Greenlandic diet with Mattak (small cubes of whale skin and blubber) a delicacy served at most celebrations.

Ever wondered how the Inuit survived for thousands of years in the Arctic with almost no fruit or vegetables whereas the early European explorers constantly battled scurvy? They ate whales and seals. Specifically, their skin and blubber, which contain high concentrations of Vitamin C.

This was the fifth time I’d tried raw blubber and I have to admit – it is still not something I’d choose to eat. The salt did help in the case, as did the fact that it was more solid than the blubber I’d previously tried, but it is definitely an acquired taste-texture-idea that my mind still won’t embrace.

The dried cod was delicious (as usual – I eat a lot of dried cod) and the dried Minke whale was also good – though a very strong and dark meat.

Our other meals were equally impressive! 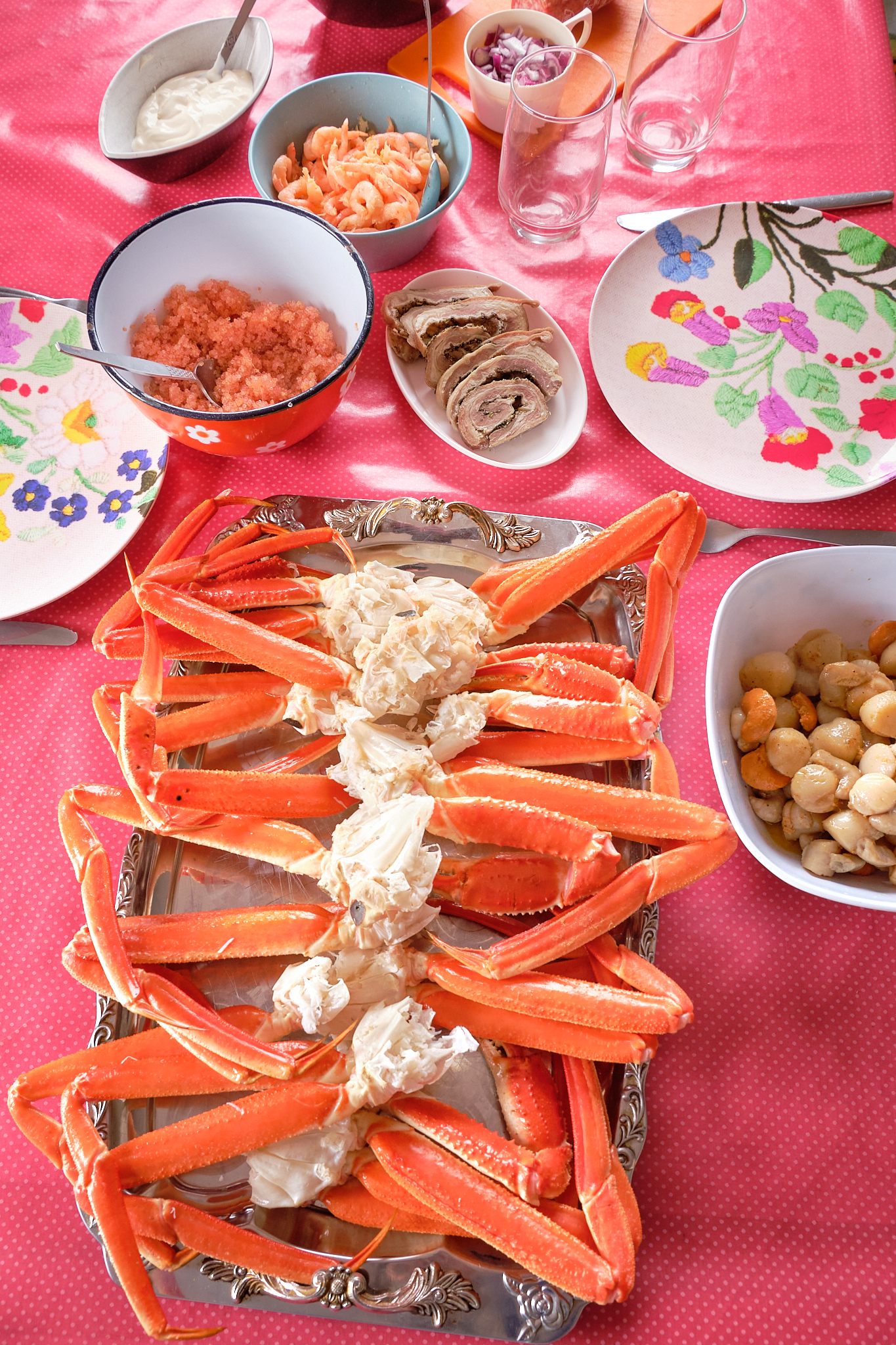 lunch at sassannguit near Sisimiut – Greenland 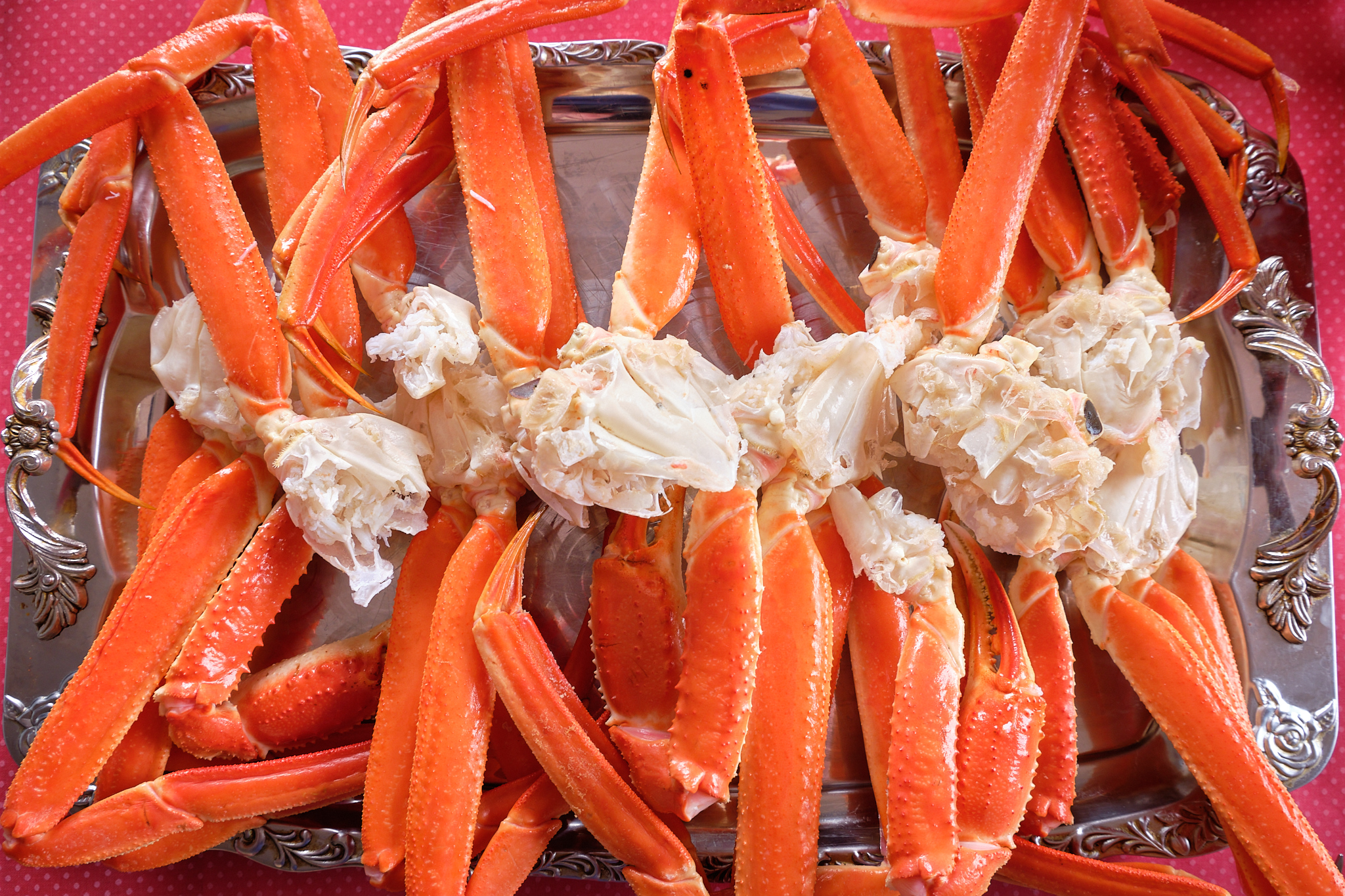 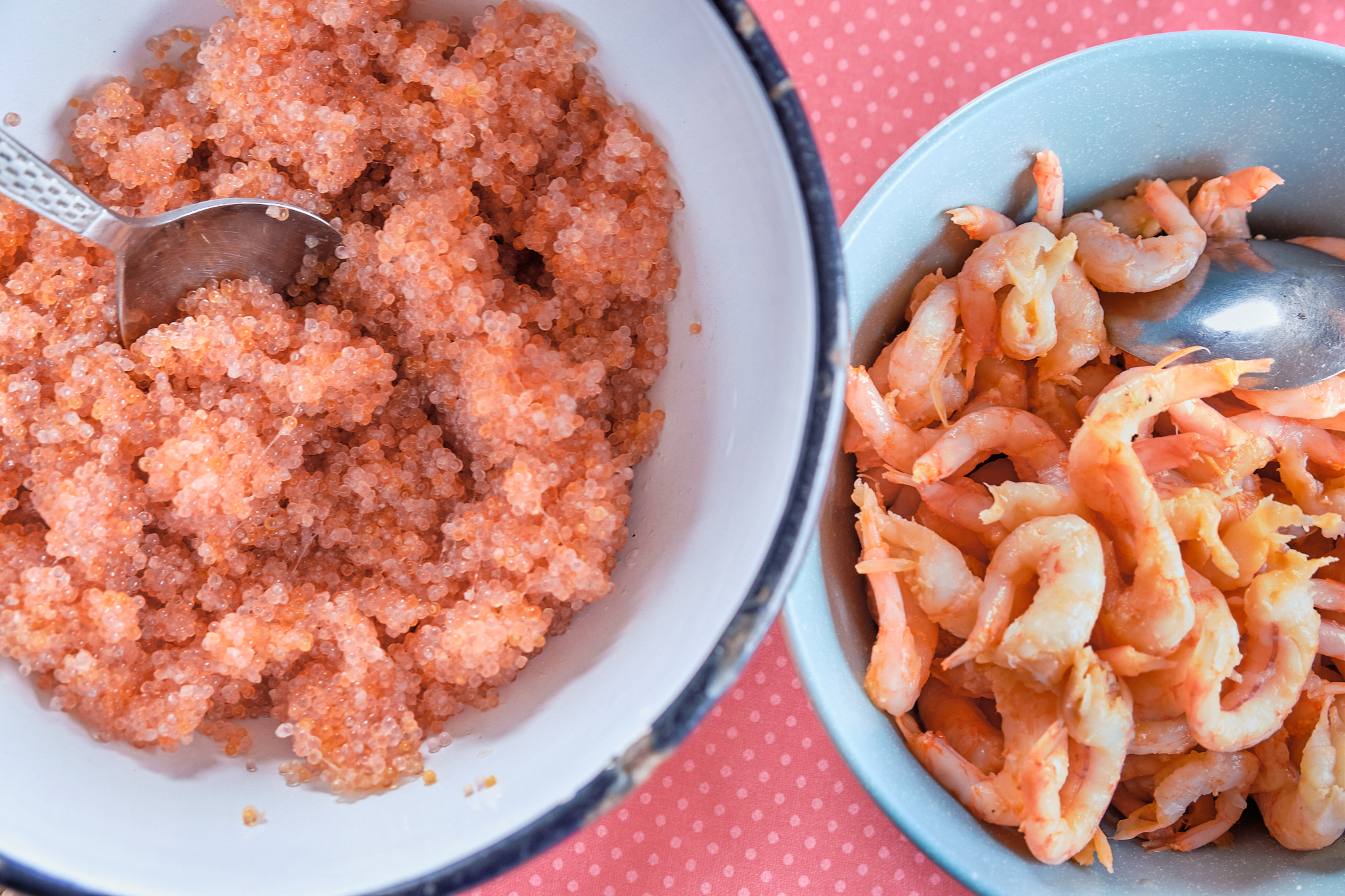 lumpfish roe and prawns for lunch at sassannguit near Sisimiut – Greenland

Seafood lunch on the second day at Sassannguit

Lunch the next day was a massive seafood extravaganza with snow crab, Greenlandic prawns, lumpfish roe, and scallops.

And dinner was musk-ox with salad foraged from around the camp and augmented with tomatoes. 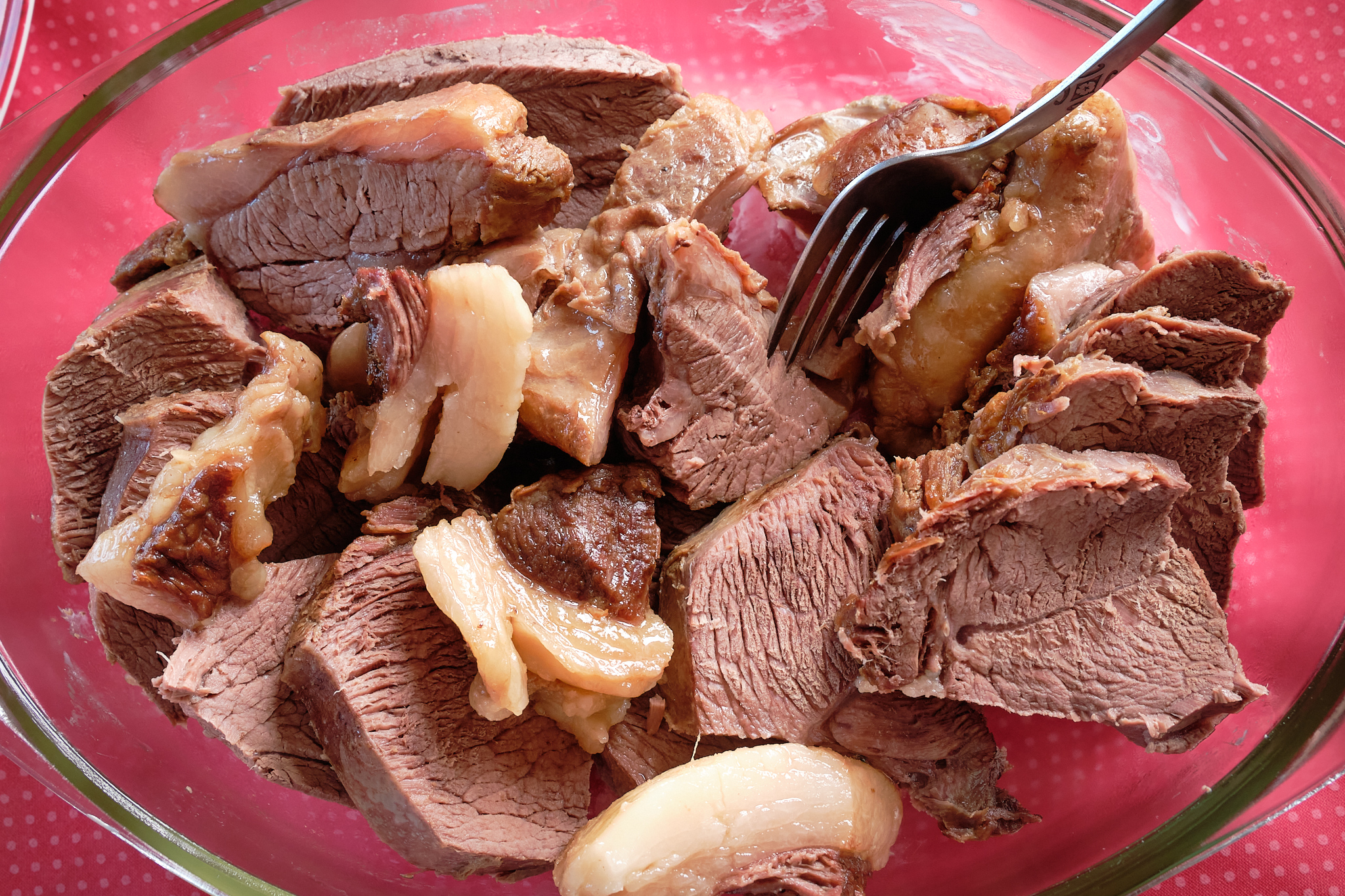 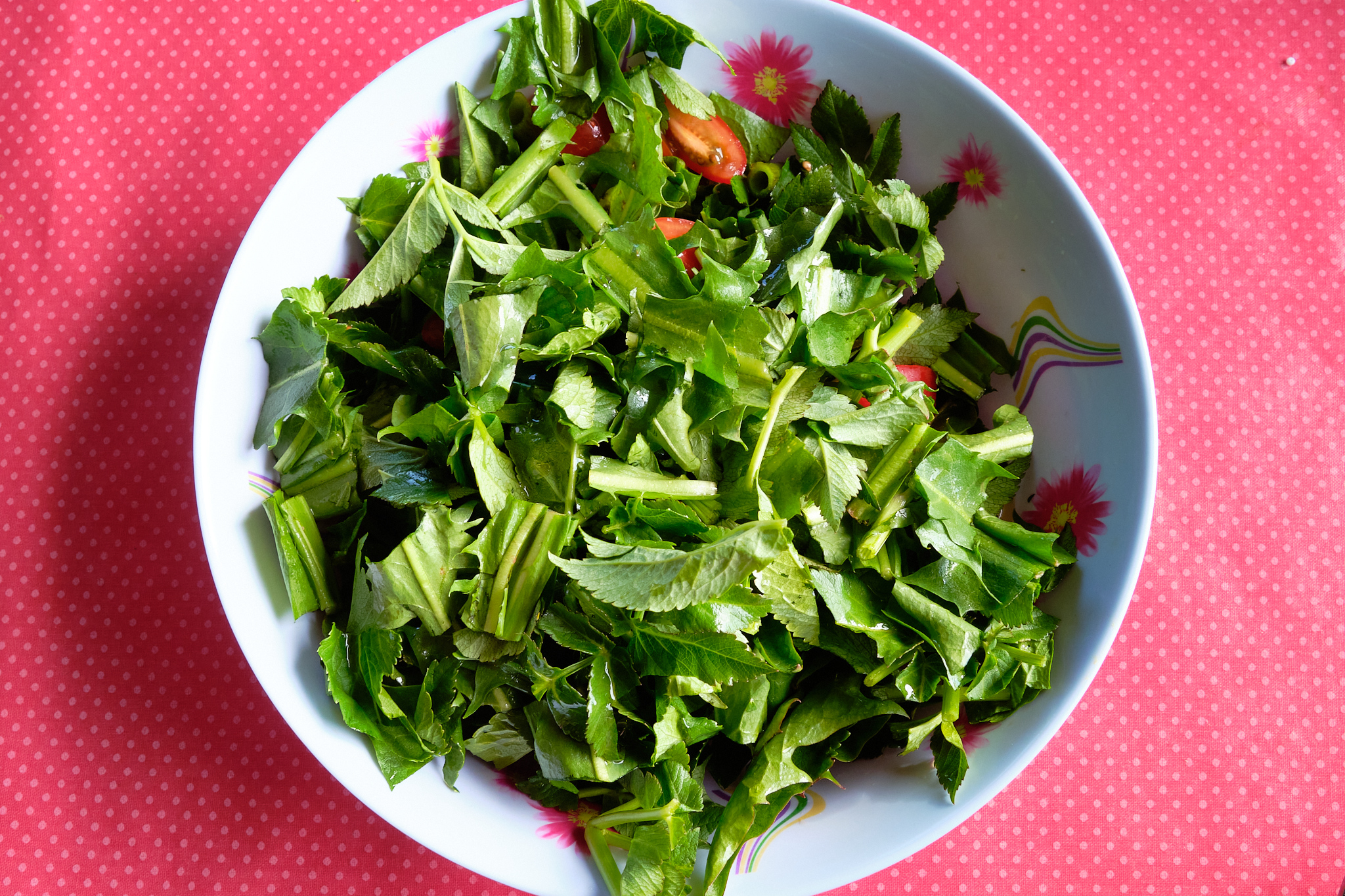 You definitely don’t go hungry at Sassannguit! And it is a fantastic opportunity to try many of the traditional Greenlandic foods.

After lunch, it was time to head out fishing. I borrowed a rod from Leif (Judith had her own fly rod) and Leif came with us to show us his favourite spots. We’d had a lot of rain recently so the river was absolutely raging and Leif wasn’t sure how that might affect the fishing. But we were keen to try.

while Leif and I used an ordinary rod to see what we could catch.

To be honest, I’m amazed that the Char can swim upstream at all with so much water against them, but they do it every year and I was about to learn how when I caught my first fish.

Man, they can fight!!

Trying to pin the fish down to take the hook out was incredibly tough as it flipped and flopped around trying to escape. Fortunately, they have no sharp bits otherwise I would have been cut to shreds! They are incredibly powerful fish. Apparently – the strongest of all trout.

This particular type of Char is found throughout the Arctic and is known as eqaluk in the Greenlandic language. It spends its winters in lakes, heads out to sea in the early spring, and then returns to spawn in the rivers during summer. This is the season to catch Arctic Char.

During the 3 hours we fished that first afternoon, I caught 5 fish (through 3 weren’t big enough to keep) and missed about 3 more. Perhaps the river was running too fast for good fishing … or perhaps I’m just not very good at it 🙂

Still, it was relaxing. And 2 fish were better than no fish. At least they were sufficient for Agathe to show us how the Greenlandic people traditionally dry and smoke their fish when we returned to camp.

Guess what was for dinner that night 🙂

If this post has piqued your curiosity about our experiences in Sassannguit in Greenland, read about the rest of my adventure:

Sassannguit is located just south of Greenland’s second-largest city, Sisimiut. If you are planning to visit Sisimiut – make sure you read my Ultimate Travel Guide to Sisimiut over at Guide to Greenland.

I have a large number of blog posts about Greenland, so feel free to read more about my experiences here on my blog or on my Greenland-specific blog at Guide to Greenland.

For more information about Greenland, the best websites are Guide to Greenland (which is also a one-stop-shop for many of the tours available), and Visit Greenland, the Government tourism site.